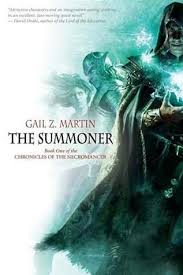 Cons: lots of repetition, characters are a little too perfect

Prince Martris Drayke’s is forced to flee his home country when his half brother forcibly takes the crown.  On his journey north to his uncle’s court, Martris discovers that his formerly minimal magical powers have expanded, allowing him to interact with spirits in ways he couldn’t before.  Is he the heir to his grandmother’s Summoner magic?  And if so, will this magic help him defeat the blood magician working with his brother?

I read this book when it first came out in 2007 and loved it unreservedly.  So it was interesting, rereading it for review, to see how many ‘debut author’ flaws I noticed this time around.  The good guys are all a little too perfect.  The bad guys have no redeeming qualities and are a bit cookie cutter.  There’s a lot of repetition in the writing, both with information being relayed several times, as well as sentences that reiterate what was just written.  One important plot advancement was told by off the cuff exposition, rather than in a shown scene.  Several common tropes show up…

But those are all nitpicky points.  Apparently years of reviewing have made me quite critical, which is both good and bad.

This book is a real joy to read.  The prose flows, and though the book is quite thick, the pages pass quickly.  I was actually shocked at how fast I whipped through it.

I love the characters.  Martris (Tris) really grows and develops as a person.  I liked that we see his magic progress, but that his quick escalation of powers is explained.  I liked that magic had limits and there were consequences for its overuse.

Kiara is another character I simply adored.  She’s got a competence without the passion to prove herself that plague so many ‘strong’ female characters.  She is what she is because she’s worked hard, practiced, and because her kingdom expects its men and women to be able to protect it.  I also liked that the narrative pointed out how Tris admired her skills without the need to test her or put her down to raise himself up.

Vahanian is a traditional rogue with a heart of gold, but he’s given more back story than usual, and cries at one point in the book.  This is a humanizing not generally seen with tough fighters, and I appreciated it.

The part of the world we see is a collection of small kingdoms.  Some different customs are mentioned, though not many.  The real point of interest with the world building is the vayash moru - vampires.  They don’t play a big role, but it’s cool to see them in traditional fantasy.  I also enjoyed the Goddess, whose different aspects were worshipped in different countries.

There’s a lot of action and the characters face a number of different dangers, which kept the book feeling fresh and exciting.

It’s an older title, but one well worth picking up.

This only occurred to me a while after I finished the book, but Berry’s quite cruel to her parents.  They know she’s been kidnapped, but after escaping the slavers, she still spends a month or more with Tris and co. before returning home.  Her parents must have been worried sick about her - and for much longer than necessary.
Email ThisBlogThis!Share to TwitterShare to FacebookShare to Pinterest
Posted by Jessica Strider at 10:04