Book Review: Too Like the Lightning by Ada Palmer 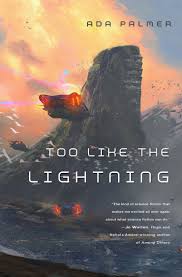 Too Like the Lightning is the first book of the Terra Ignota duology.  The second half, Seven Surrenders, comes out in December.  The two books together are a historical account of 7 days that lead to an event that changes the world, as written by Mycroft Canner, an eye witness to many of the events, as well as instrumental to a lot of vitally important background activities.  The year of interest is 2454.  Though the current world doesn’t use gendered pronouns and raises all as equals, Mycroft uses antiquated words for this account.  Religions shows up too, though the Church Wars have made all proselytising, churches, and cults illegal.   Mycroft is a Servicer, available to anyone who needs a servant, though most often seen helping those in high offices, to atone for the crimes he committed 13 years prior.  He starts his great work by explaining the meeting between the sensayer Carlysle and Bridger, a 13 year old boy, who for his own safety Mycroft has kept hidden.  A boy who can perform miracles.

The book starts with a title page explaining the permissions obtained so that the book could be published, as well as the various content ratings the book received.  While these names and institutions don’t mean much to the reader at the beginning, they set the tone for a book with fully immersive world-building.  I spent the first half of the book trying to piece together the meanings of positions and terms, placing characters into their political groups, and feeling quite lost by the sheer mass of things that are left unexplained.  While Mycroft does give occasional asides for the reader, these are asides for readers of his present, for whom the events being relayed are past, and for whom the terms that I questioned aren’t unfamiliar.

The brilliance of the book starts in the second half when the occasional philosophical asides start to be reflected in the plot through the actions of the characters.  It’s here that you start to understand that the book isn’t a straight narrative, that you’re meant to examine the different layers of text and subtext in order to piece together what’s actually going on.  For example, Mycroft doesn’t always gender people properly.  It’s frustrating as a reader, but there is a reason for this, which comes up later in the book.  Similarly, some scenes are disturbing to read, not because they’re graphic, but because they pair eroticism and terror, something most people don’t equate.  This again is done for a reason that the book eventually reveals.  So many later revelations make you reevaluate what you understood from the first half of the book.  Sometimes more than once.

The world-building is exquisite.  It’s completely alien to our current political situation, and yet is something one could imagine coming to pass given the circumstances the characters face.  The politics are fascinating, with level upon level of competition and alliance.

There are a lot of characters to remember, but I didn’t have any trouble keeping them all straight.  I do recommend, however, bookmarking the seven-ten list when it’s revealed, as you’ll be referring to it several times as more people are introduced and the political situations become clearer.  In fact, I haven’t bookmarked and highlighted so much text since university.  This is the kind of book I would have loved to have a professor explain the intricacies of, and then write an essay on.

I almost put this book down on several occasions.  It can be that frustrating and confusing at times.  But the pay-off when you start understanding what’s going on, with all its layers and complexity, is definitely worth the effort.  I cannot wait for the next book to come out.
Email ThisBlogThis!Share to TwitterShare to FacebookShare to Pinterest
Posted by Jessica Strider at 09:13