You can read parts 1 and 2 to see how I got to this point in my art project.

With the pages glued together it was time to start painting.  I used black acrylic paint and did a fairly good covering.  I wanted to leave a hint of book, so the page edges aren't completely black.  For the covers - since it's glossy paper - I used a layer of gesso as primer before painting over it.

I added some brown (twice) trying to get some contrast but you can't really see it.  I was afraid of messing the project up and I really liked the black (think of watching a Bob Ross painting video where he makes a change and it looks horrible until he does something else that makes it look wonderful.  I was afraid I'd be stuck in the horrible phase and so was afraid of doing things that might make it look even better if done correctly).

I realized that the joined pages at the bottom still wouldn't give my figures much standing room (even assuming the base of the cut out sections were properly flat - which they weren't - so I cut out a rounded piece of cardboard and glued it on as a platform. 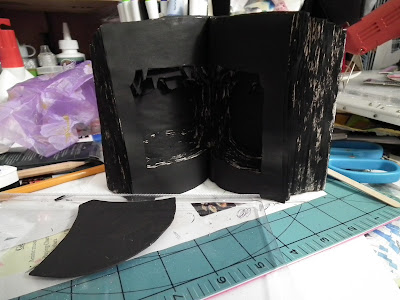 I ended up going back in with some pink glow in the dark paint as a kind of cave luminescence.  I'm not sure I'm happy with that... 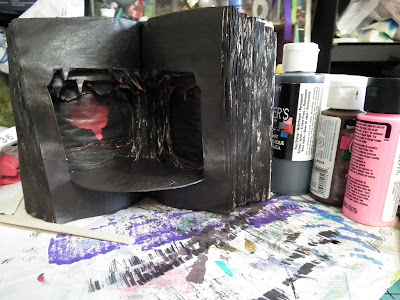 For the cover/spine, I wanted to build the book up to look like a mountain, so I added several layers of hot glue.  Turns out it takes a lot of hot glue to do that, so I didn't do as much of that as I'd planned. I'm deluding myself into thinking it looks a bit like Devil's Tower.  :)  Paint worked on the glue better than I'd expected. 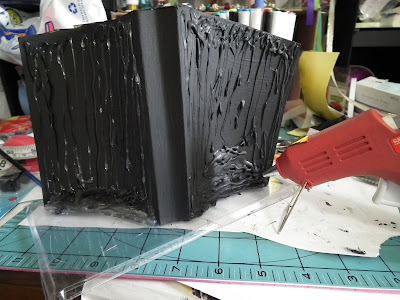 I used a matte acrylic sealant on the project before adding the final touches.  I used reindeer moss for the grass.  I left some space open as the figures don't stand that well on the moss.  Around the moss I glued down some twigs from a bush outside that looked tree like.  I'd intended to add some leaves (I bought flocking powder which hasn't arrived yet), but decided that with the black desolate landscape dead trees would look more authentic, so left them as is.

And here you have it.  My finished book art sculpture/D&D figure display stand. 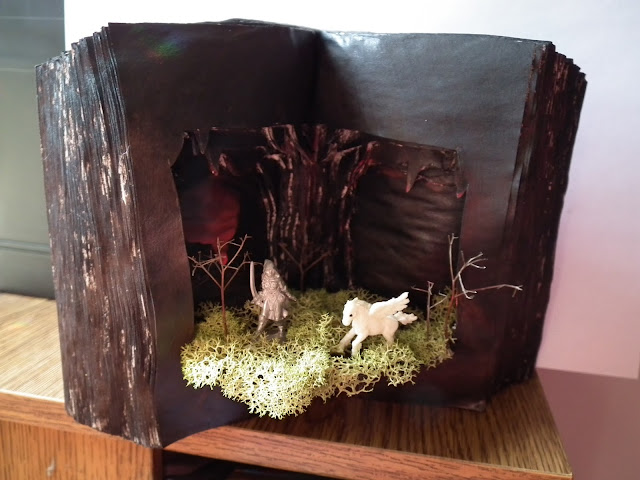 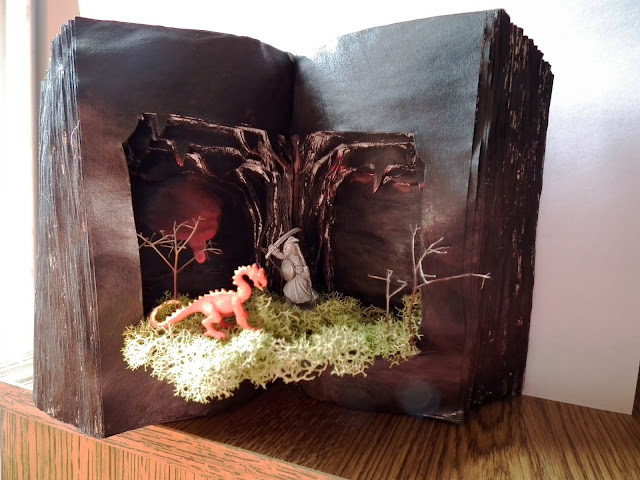 The pewter figures are D&D miniatures I bought a LONG time ago.  The mythological creatures are soft plastic that I bought as a set at Michaels - unicorn, pegasus, several dragons.  I have permanent plans for some of them.  I also have plans to make one or two more of these stands.  I want one that isn't painted, that shows off more text and has a less square display box, and one that uses more colour, where I do add blossoms or leaves to the trees, flowers, etc.

Email ThisBlogThis!Share to TwitterShare to FacebookShare to Pinterest
Posted by Jessica Strider at 10:03

I really like the pink glow. It's the first thing I noticed, and it gives it more depth. Very nicely done!