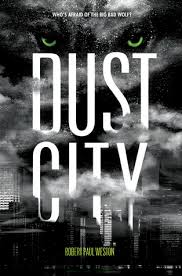 When the fairies vanished other hominid species moved into their home on the floating island of Eden and started mining the dust they left behind.  Though the dust isn’t as potent as what the fairies once used, it can cure minor ailments, and the hominids and animalia in the city below are hooked.

Henry Whelp is the son of a convicted drug runner and murderer.  Though he’s a good kid, a bad decision lands him at the St Remus Home for Wayward Youth, and another reason society still fears and distrusts wolves.  But Henry uncovers a mystery that involves his dad, the missing fairies, and the dust that’s becoming more and more potent.

It was really cool reading a fairytale story from the point of view of one of the talking/evolved animals.  In the stories these are either the bad guys (like the wolf), guides to human protagonists (ravens & foxes), or creatures drafted into the magic (mice, birds).  So it was an interesting perspective, as the humanoid characters mostly look down on the animalia.

As with most books that riff on fairy tales, part of the fun is figuring out what characters come from what stories.  There’s little mystery here if you’ve read the brothers Grimm, though I’ll have to look up the story of the girl without hands.  The characters are cleverly used, particularly Detective White, referencing their fairytale backgrounds without being limited to their origin stories.

The world is wonderful and feels real, what with its racism, drug problems, corruption, and more.  Henry encounters several people from different walks of life, giving a decent overview of the lower city.

While the book isn’t funny - in fact, it’s quite dark - there were a few lines, particularly in the scenes with Siobhan’s granny, that made me laugh out loud.

Some of the descriptions got a little… gross.  There’s a lot of spit and drool, disgusting smells, some blood and violence, and a torture scene.  But that’s a pretty minor issue.

On the whole I really enjoyed this book and found it quite unique in its treatment of the stories and characters.
Email ThisBlogThis!Share to TwitterShare to FacebookShare to Pinterest
Posted by Jessica Strider at 10:15