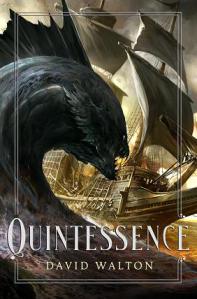 The Western Star returns to England from the edge of the world purportedly carrying treasures untold, but the hold is full of barrels of dirt, rocks, and seawater, and the crew has mysteriously died.  Stephen Parris, physic to the ailing King Edward VI, attempts to increase his knowledge of the human body by dissecting corpses, an act that would mean his execution if discovered.  The most recent body he examines, from The Western Star, is remarkably preserved and has some bizarre characteristics.  Christopher Sinclair is an alchemist, determined to find the elixir of life, and believes the tales of wealth the admiral of The Western Star told before he died.  He convinces the king to finance a second mission for the repaired ship and persuades Parris to accompany him on his voyage of discovery.

This book is set in a world very similar to our own where the Earth is, in fact, flat, and a mysterious substance called quintessence - the fifth element, the essence of life - is found in creatures that live close to the world’s edge.  The book, consequently, has a lot of fantastical creatures, starting with a beetle that can fly through walls and a manticore that can speak mind to mind using its tail as a connection port.  Learning about the different creatures and their miraculous properties was highly entertaining.

I’m currently learning about the history of science so it was a real pleasure to see Aristotelianism argued against atomism (not to be confused with the modern atomic theory).

The book doesn’t pull any punches with regards to what life was like, either with England in its time of tribulation (with the succession), shipboard life, or the challenges of learning about a new land.  I especially appreciated that the Spanish inquisition was used accurately - as a way to wipe out heresy, not a series of witchcraft trials.  Again, the horror of the institution isn’t toned down at all, and the true targets, conversos (Jews and Muslims who professed conversion to Catholicism while retaining their beliefs in secret), are briefly shown in focus.  Witchcraft does come up, but in the contexts of body snatching and magic.

I really liked Parris and his inquisitiveness, as well as his daughter Catherine, and her desire to learn more about the natural world and avoid marriage for the time being.  I felt that Catherine grew over the course of the book, though mostly at the end, when the consequences of her actions throughout the book become clear.  Parris too grows to some extent.

Sinclair is pretty interesting as a character, though he’s not very likeable.  I found his experiments cool, but his willingness to manipulate people to get his way became disturbing as the book wore on.

Most of the action in the book was predictable but there were some interesting twists, mainly concerning the creatures encountered and revolving around the ending of the book.

The ending came rather suddenly and wrapped things up a little too neatly.  A number of people mastered powers too quickly to be believable.  I did, however, appreciate that there was no cliffhanger leading to the next book in the trilogy.

Just to clarify my comments about the ending for those who have read the book, I understood that Catherine could - under duress - figure out that she has powers due to the influx of quintessence in her, but I object to her mastering it in 5 minutes.  The explanation behind it seemed to boil down to the idea that humans master all sorts of skills and never have to consciously think about them again.  But many (most?) of those skills have to be learned in infancy/childhood.  And if you suddenly acquire an ability in adulthood that you lacked before, you have to learn how to do it (even if it’s a skill you had and lost for a period of time, like walking again after breaking a leg).  Even more egregious is Parris’ ability to watch Sinclair perform the resurrection ceremony once and be able to perfectly modify it to give others the same quintessence powers Catherine got.  Sinclair practiced on animals, not enough to truly understand what he was doing, but even he failed on his first try on a human.  But Parris manages to get it right 5 times in a row with no prior experience at all.
Email ThisBlogThis!Share to TwitterShare to FacebookShare to Pinterest
Posted by Jessica Strider at 09:25