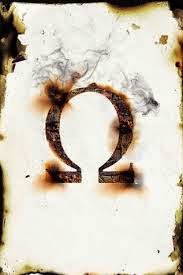 400 years ago the Blast wiped out most of humanity.  Now everyone is born as twins.  One child, the Alpha, is perfectly formed.  Alphas teach that the second child, the Omega, is born of the poisons that haven’t entirely dissipated from the Blast, thereby explaining their deformities: a missing limb, an extra eye, the inability to speak.  Visions.  The Omegas, unpleasant to look at and more prone to disease, are sent away, but kept in decent enough conditions because when one twin dies, so does the other.

Cassandra is a seer, a rare Omega with no distinguishing features but the ability to sense things about the world around her.  Raised with her twin brother Zach longer than usual, due to her unblemished appearance, both their lives are impacted.  Zach’s fear of Omegas and the rejection of his peers causes him to have ambitions that will change the lives of Omegas everywhere, starting with Cass.

I find myself somewhat conflicted about this book.  I really liked the premise surrounding the twins and the political and ethical questions regarding the treatment of the Omegas, but there’s very little plot.  Most of the book is about Cass running away from her brother.  That’s not to say that the book isn’t interesting, the characters pass through a cross-section of the world, and it’s a very interesting world.

While I liked Cass and Kip - a fellow hunted Omega - I didn’t end up with the emotional connection to them that I expected given the character driven nature of this book.  I go more into my thoughts on their relationship in the spoiler section below.

I liked that Cass had the idea that Alphas and Omegas shouldn’t be considered separate groups, especially given their death connection, but the few times she brings it up her idea is shot down by others.  I recognize how hard changing such ingrained beliefs would be and kind of hoped to see the author tackle it by having Cass bring it up more often, wearing her compatriots down or finding new and more concrete ways of getting her views across to more people.  I’m wondering if book 2 will deal more with this.

The book was enjoyable to read but left me wanting more from it than I got.

While I understood that Cass and Kip came to care for each other I was left unsure of how close their relationship ultimately became.  There’s mention of kisses, but nothing beyond that and while they share a lot of close contact, there wasn’t much in the way of intimate discussion (and yes, I recognize that his amnesia would make that more difficult there are still ways of sharing hopes and fears that don’t depend on explaining your past).  The event at the end had no impact on me, which came as an unpleasant surprise.  I’d thought I’d cared for the characters more than that and I’ll often cry when horrible things happen to characters I love.  Here, my reaction was to shrug and turn the page.

And I understand that there would have been negative consequences for Zach had his twin been found at the silo, but I still find it hard to believe that he let her go completely.  Couldn’t he have locked her in his office or something?  Not the best plan, sure, but better than letting her go where he’d have to hunt her down again and wonder all the time if she’s about to die.