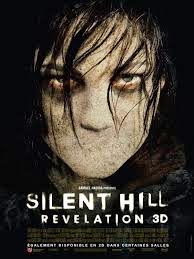 Cons: protagonist ends up exactly where she needs to be, Vincent understand normal life despite his upbringing, plot changes from the game make less sense

Heather and her dad have moved to another new town.  When a detective warns her that he’s revealed her location to people looking for her, she’s forced to go to Silent Hill.

This movie nails the special effects.  The monsters and buildings look awesome and the amusement park is brilliantly done.  I loved the transition between the regular world and the ‘hell’ world.  The film really captures the look of the video game.

I found that Heather moved around the town in a surprisingly linear way.  Despite crawling out of an air duct at one point she somehow emerged in front of the building she needed to get to.  With the exception of the drive to Silent Hill, every scene pretty much cuts to where she needs to be, even though the game is all about exploring and discovering the path.  Similarly, keys are easy to find and the correct doors properly marked.

Heather uses a gun once, but never uses a metal rod or anything else to fight with, the way her character did in the games.  On the plus side, this meant there was little in the way of gore (in comparison to the games).  On the down side, it felt like things were too easy, with her either defeating things quickly or not fighting them at all.  Having said that, the scene with the nurses in the asylum was brilliantly creepy.

Because the first film changed the plot from the video game, this film also has to modify the plot.  An unfortunate consequence of that is that the climax isn’t particularly climactic.  There’s a great fight scene, then the film is over.  There’s an even bigger fight scene at this point in the third game, with a plot twist the movie doesn’t go into.  As with the first film, if you think about the plot too much it doesn’t make much sense.

Some of the characters’ motivations make no sense, specifically that of Harry - and his constant moving around - and Vincent.

My husband pointed out that Harry (Sean Bean) didn’t see what happened in Silent Hill in the first film, so what is he running from/protecting his daughter from?  He didn’t see the cult, didn’t see the monsters, doesn’t know what she is or anything.  I assume she could have explained stuff to him, but she was a child during all of that, and what adult takes children’s nightmares seriously?

Vincent.  I really liked him in the film.  I think Kit Harington was an excellent choice to play him and I think the role was well done.  Having said that, how did he learn so much about the regular world?  He can drive, he signs up for school, has decent clothes, has money…  And he trusts Heather after knowing her for about 30 minutes, despite a lifetime of brainwashing.

That’s a lot of complaints, but I did find the film really enjoyable to watch.  I prefer horror films with more thinking and less gore, and this fit the bill.  I also enjoy the creepiness of the Silent Hill games, which this embodied well.  I think the actors did a great job and I would watch it again.