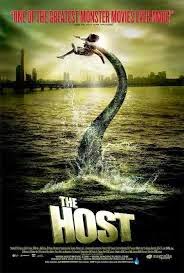 An american scientist forces his lab tech to dump toxic chemicals into the Han River.  Years later a monster emerges, attacking people and spreading a plague.  One of its victims, a high school girl, is part of a family of failures, who decide to get revenge on the monster.

The characters make this film.  They’re earnest people, but they each have major flaws.  The girl’s father can’t stay awake for long, always napping at his dad’s snack shop where he works.  Her aunt is a professional archer, who holds her shots too long.  Her uncle is an unemployed university graduate and her grandfather tries to keep them focused through cup noodle soups and love.

Interestingly, the dad, who seems like such a waste, comes across as a hero during the first appearance of the monster, trying to help people get away from the river and save who he can.  But he can’t save his own daughter, which causes him lots of anguish.

There’s a good mix of humour and horror as the characters deal with the government officials rounding up those exposed to the monster - which they believe is carrying a communicable disease.  The special effects used to create the monster were well done, making it seem real rather than cheesy.

I loved Hyun-seo (the daughter, played by Ah-sung Ko)’s attempts to escape from the monster.  She’s smart and tries so hard to get out of a bad situation.

The ending surprised me, both with how the family pulled together and with what ultimately happened.

Email ThisBlogThis!Share to TwitterShare to FacebookShare to Pinterest
Posted by Jessica Strider at 11:39