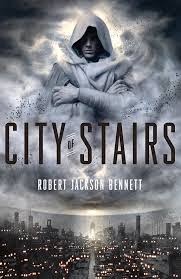 Three hundred years ago the people of Saypur rebelled against the Continent, killing its Gods and enslaving the populace as they had been enslaved.  Continental history has been suppressed and any mention of the Gods and Their Miracles is considered a criminal act.  With tensions high in the ancient capital of Bulikov, it’s not surprising when a Saypuri professor is killed while studying the history of the Continent.  Shara Thivani, an intelligence officer with an unhealthy interest in said history, goes there to investigate, and finds more than a simple murder.

While the content and scope are decidedly different, the closest parallel to this book I can think of is Dune by Frank Herbert.  Instead of a distant planetary system in the future, City of Stairs deals with gods and an imperialistic past, but the weight of its history and the intricacy of the plots left me thinking, numerous times, of Dune.  This was likely helped by Bennett’s use of quotations from historical sources and politicians at the start of each chapter, something Dune employed to help disseminate information without resorting to info dumps.  If you want a more modern comparison, then Mad Gladstone’s Three Parts Dead comes to mind.

The book captures your attention with the troubling and thought provoking first quote from The Book of the Red Lotus, one of many holy books for one of the Continent’s 6 Divinities:

And Olvos said to them: “Why have you done this, my children?  Why is the sky wreathed with smoke?  Why have you made war in far places, and shed blood in strange lands?”
And they said to Her: “You blessed us as Your people, and we rejoiced, and were happy, and they were willful and ignorant of You.  They would not open their ears to Your songs, or lay Your words upon their tongues.  So we dashed them upon the rocks and threw down their houses and shed their blood and scattered them to the winds, and we were right to do so.  For we are Your people.  We carry Your blessings.  We are Yours, and so we are right.  Is this not what You said?”
And Olvos was silent.

The idea that the Continent’s people were chosen of the Gods is central to the book.  What does it mean when you’re backed by divine right?  And conversely, what does it mean to those you enslave, that they are not?  Turning the tables on their oppressors, the Saypuri have become what they once hated.  It’s clear that despite the time that has passed both sides are still heavily influenced by their past, even if the people no longer have a proper understanding of their history.  Old tensions and hatreds cloud modern judgement and ensure that the people of Saypuri keep those on the Continent in poverty, rather than letting them rebuild and start over.

But that’s not the only thought provoking issue the book goes into.  It’s hard to read this book and not compare the philosophies it espouses to the conflict in Gaza*, though the book would have been finished long before the fighting there started up again.  My original thoughts were that the book drew on experiences from the British occupation of India, though I don’t know enough about that to know if any specifics were cribbed.  The book has a ‘what if India managed to rebel earlier and ended up subjugating England’ feel to it.  Saypuri character names sounded Indian to me, which helped this impression.  Though the Continental names sound Russian, so Bennett may have been cribbing from several real world occupations, rather than just one.  Or none at all.  Regardless, I love fantasy that makes me think about the real world and its history.  I’ve not studied colonialism in any detail so this book was fantastic in that it helped me understand more of the complexities surrounding it including the underlying resentments, the hold the past has on you and the inability descendants have with moving on.

Though the core cast of the book is fairly small, there’s a large enough supporting cast to give the book a grand, epic, feel.  The cast is nicely diverse, with several people having visible disabilities (a limp, a missing eye, a facial scar), there’s a prominent homosexual who must hide what he is in the still ultra-conservative Bulikov, and the people of Saypur, we are told, are a dark skinned people.  The Saypuri are an equal opportunity country with women in numerous positions of power, though the protagonist is still referred to as ‘my girl’ by an older gentleman of her nation, showing that not everyone there is progressive.

The book did a remarkable job of showing world building through subtleties rather than overt references or gratuitous scenes.  For example, rather than have someone raped, the protagonist is quietly asked if a particular official’s female servant is pregnant, implying both that the official was one to use his position of authority to get sex, but also that women of the subjugated race face these kinds of dangers/pressures.

This is a brilliant novel, the kind of book aspiring authors should read over and over again to see how Bennett made his characters and places come alive.  If you like intense world-building of the style used in Frank Herbert’s Dune or Max Gladstone’s Three Parts Dead, pick this up.  If you’ve been looking for diverse characters, pick this up.  Seriously, pick this book up.  You won’t regret it.

* Since not everyone’s familiar with the Bible, specifically the Old Testament, the Israelite people were promised a land (modern day Israel) as long as they were righteous.  To claim the land they first had to remove the people inhabiting it.  Over time the country was conquered by successive groups and the majority relocated and eventually scattered.  While none of that directly contributes to the current conflict, there’s a lot of religious underpinnings that indirectly affect things (Zionism being just one of them).
Email ThisBlogThis!Share to TwitterShare to FacebookShare to Pinterest
Posted by Jessica Strider at 12:04

It's a most excellent book!