With the news that Osprey Publishing has sold off several of its imprints, including Angry Robot Books, to focus on its history side and get more into gaming, I present the books they sent me earlier this month.

Myths and Legends: Sinbad the Sailor by Phil Masters - I really enjoy this series and have been reading up on medieval Egypt recently, so this should be a great read.  The books have a nice blend of storytelling and background information so you can set the stories in their historical contexts. Sinbad is the 11th book in the series. Sinbad the Sailor presents a retelling of the stories of the most famous adventurer from One Thousand and One Arabian Nights, with added information covering the history of the stories and the age in which they are set.

Stories say that in the age of the Caliph Haroun al-Rashid, in the port city of Basra, there lived a wealthy man named Sinbad the Sailor. Sinbad had great tales to tell, of the seven voyages on which he acquired his fortune, of the strangeness and terror he encountered along the way, of huge monsters and strange people, and of storms at sea and lands beyond the horizon.

This book retells the tales of those voyages and places them in context. It discusses not only the greater collection of stories known as One Thousand and One Arabian Nights within which Sinbad appears, but medieval Cairo where these tales were told, the historical Abbasid Dynasty which ruled Sinbad's home city, and the great Arabian voyages of exploration and trade which inspired these stories. It also looks at the modern incarnations of Sinbad that have appeared since his tales reached the West - including Sinbad as the swashbuckling hero of stage plays, stop-motion movies, and television fantasy.


Lion Rampant: Medieval Wargaming Rules by Daniel Mersey - I haven't done any tabletop gaming, so I can't judge the rules or gameplay presented, but there are a lot of colour photos showing the painted figures in play, detail notes and customization options.  It's a set of basic rules that you can modify and apply to numerous scenarios (several of which are presented at the end of the book). (64 pages) 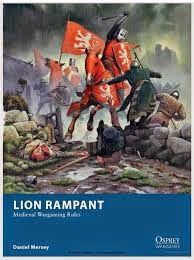 Lion Rampant is a set of rules designed for fighting historical or Hollywood battles in the medieval period from the Norman Conquest to the Hundred Years' War. This period is well suited to large skirmish gaming as played with Lion Rampant as it was a time of anarchy, feuds, robbery, and raiding. Become Robin Hood, Richard the Lionheart, Gamelyn, William Wallace, Llewellyn the Last, or other legends and leaders from the colorful, dangerous medieval period.

Gameplay is very simple, and requires the player to use units in the correct tactical way: knights are great at charging down enemies but less useful for guarding convoys, while spearmen are jacks of all trades and masters of none, and bowmen are to be feared at distance but easily cut down if you can get close enough. An army usually consists of 6-8 units comprised of 6-12 individually based figures (making it ideal for 15mm or 28mm games), and is led by a Leader, who may have some unique character traits that affect game play and provide some opportunity for role playing. The action, however, focuses very much on the small units involved in the battle rather than individual characters: each unit moves and fights independently, assuming that they follow your orders rather than just doing their own thing. Command and control is just as important on the battlefield as the power of a mounted knight.

Some army lists are provided, and guidance given for players seeking to create their own forces, but this game is not army list-heavy. The rules include a good number of scenarios, which are important to this style of gaming.


Bolt Action: Tank War: Wargames Rules by Ryan Miller, Rick Priestley and Alessio Cavatore - The book goes over platoons, scenarios and vehicle crew before giving biographical data on a number of 'legendary crew', real WWII tank crewmen and synopses of several real tank battles (and how you can play them).  There are a lot of pictures of models in formation as well as illustrations of tank battle to draw inspiration from.  There's also an A to Z of tanks and trivia scattered throughout the book, two appendixes with extra tank info, a third for useful vocabulary to get into the game mindset and a fourth with rules for a mini-game you can play.  While designed for gamers, this book has so many extras that even WWII and tank enthusiasts will find information of interest here.  (96 pages) 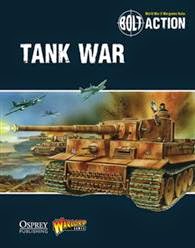 Tank War, the new supplement for Bolt Action, gives players the option to expand their games to a whole new level - armored warfare. Recreate such great engagements as the battle of Kursk with the scenarios, army options and special rules found in this book. Whether you want to add more armour to your existing armies or build an entirely armoured force, Tank War has you covered.