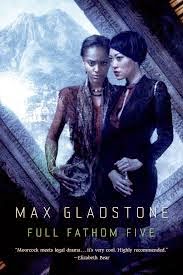 Kavekana is an island with no gods of its own, where offshore interests can purchase an idol to store soulstuff.  When the priestess Kai jumps into the sacred pool to try to save her co-worker’s created idol, Seven Alpha, her actions have many unforeseen consequences.

Izza is a thief.  When the Blue Lady she worships dies, she realizes it’s time to leave the island before her age makes her eligible for her crimes’ punishment: being placed inside one of the stone Penitents that guard the island.  But she’s soon pulled into the mystery surrounding a poet who’s lost his inspiration, and Kai’s investigation.

This is the third book published in Gladstone’s Craft Sequence series.  While it stands alone, like the others, this one uses characters from the first two books and shows some aftermath from what’s come before.  It’s storytelling that doesn’t alienate newcomers while giving more depth to those who’ve read the other books.

The world-building, as with the previous books - is top notch.  Gladstone’s created a world of interconnected everything: trade, tourism, religion, law, war, history, etc.  There’s always the sense that there’s more to know, that each book is only scratching the surface, and with each book more of the world and its past and people are uncovered.  Because the protagonists are from very different social strata, we get to see a lot of the island - security, police, tourism, slums, offices, etc.

The characters are interesting.  Kai and Izza are both challenged by what’s going on, attempting to solve several mysteries, if from different sides.  The Penitents are a chilling - if effective - punishment, that evolves into a police force that’s 100% loyal.  Even the poet has his moments.

The plot weaves around and eventually comes to a satisfying conclusion, though one that takes place in a world that continues on after the book ends.

These are fantastic books that take place in a fantasy realm with all the complexity of the real world.  If you like well written fantasy with some mystery thrown in, and diverse characters, these are for you.