Sergei Lukyanenko's Watch series is one of the first urban fantasy series I read, and it remains one of my favourites, even though I've not had time to read the fourth book (Last Watch) patiently waiting on my shelf.  Starting with Night Watch, they should be read in order, as some aspects carry on to the following books.

I saw last year that there was a new book, but it was only available in English in the UK.  Well, in April it's coming out in North America, so I'll finally have to read book 4 so I can get to book 5.  If you like dark stories with a Russian setting, give these a try. 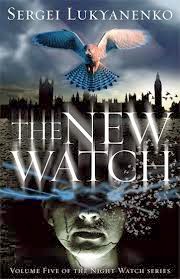 Walking the streets of our cities are the Others. These men and women are guardians of the Twilight, a shadowy parallel world that exists alongside our own. Each has sworn allegiance to one side, fighting for the Light, or the Darkness. But now, beyond the continuing struggle comes a peril that threatens their very world. . .

At Moscow airport, Higher Light Magician Anton Gorodetsky overhears a child screaming that a plane is about to crash. He discovers that the child is a prophet: an Other with the gift of foretelling the future. When the catastrophe is averted, Gorodetsky senses a disruption in the natural order, one that is confirmed by the arrival of a dark and terrifying predator.

From the Night Watch headquarters Gorodetsky travels to London, to Taiwan and across Russia in search of clues, unearthing as he goes a series of increasingly cataclysmic prophecies. He soon realizes that what is at stake is the existence of the Twilight itself--and that only he will be able to save it.

Email ThisBlogThis!Share to TwitterShare to FacebookShare to Pinterest
Posted by Jessica Strider at 12:42