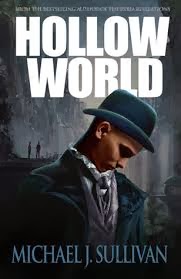 When Ellis Rogers hears that he is terminally ill with idiopathic pulmonary fibrosis, he decides to use the time machine he built in his garage.  He says goodbye to his best friend and learns a devastating secret about his wife, who’s been cold towards him after the suicide of their son.

But he goes much further into the future than he intended, and the future is very different from what he’d pictured.

Sullivan begins his book with an author’s note, where he explains that the science he uses to explain time travel is meant to be taken much like that of H. G. Wells, a means to an end.  If you’re looking for hard SF and detailed explanations of how everything works, this is not the book for you.

Like The Time Machine, the book’s an exploration of humanity, and toward the end especially, there are some interesting philosophical discussions.  There’s also a murder mystery to solve, which provides most of the plot based elements of the book.

I enjoyed his look at the future.  It’s quite unique, and allowed him to examine several aspects of modern day society.  And for those of you who like questions of gender… without spoiling anything, his future has some surprises.

The pacing is uneven.  Chapters full of character interactions and learning about life in Hollow World are suddenly interrupted when the mystery reappears.  I sometimes had trouble transitioning from the laid back enjoyment of the former scenes to the intensity of the latter.  It’s surprisingly easy at times, with all that’s going on, to forget the mystery is even there.

The book comes to a pretty tense climax.  Everything focuses and the pacing evens out for the final chapters.

This was a personal pet peeve, and I’m not sure to what extent it will annoy others, but Sullivan threw in a LOT of modern pop culture references, which I found distracting.  Especially since I didn’t understand most of the references he used.  For example, instead of saying that the gram (basically a TV show) Ellis watches is a documentary, he says, “This was a multi-part series similar to a Ken Burns documentary or something produced for the History Channel.”  While I know what the History Channel is, I’ve never heard of Ken Burns.  I read something once that a classic is a book that can transcend time.  Once you have specific references to current culture the chances of someone being able to pick the book up and read it without problem 100 years later is doubtful.  I could have used some end notes to explain some of the references, as will people less in the loop than I am.  Luckily for me Sullivan tended to use several references in a row, so if I didn’t understand one reference, often another would suffice to clue me in.

It was an interesting story with some thought-provoking moments towards the end.
Email ThisBlogThis!Share to TwitterShare to FacebookShare to Pinterest
Posted by Jessica Strider at 13:09

I'm astounded you've not heard of Ken Burns. It's kind of like saying you've never heard of hot dogs and hamburgers.