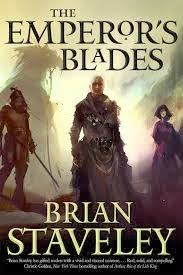 The Emperor of the Annurian Empire has died.  His oldest child, a daughter, Adare, lives in the Dawn Palace and has been raised to the post of Finance Minister.  Kaden, the heir to the Unhewn Throne, has been training under the tutelage of the Shin monks for eight years, trying to master a technique he’ll need in order to rule.  Their younger brother, Valyn, is close to becoming a member of the Kettral, an elite force that flies on gigantic birds.

As the plot that killed the emperor spreads to his children, they must master their various skills in order to survive.

This is a slow building story that allows the reader to learn about the world through the actions and knowledge of the characters.  There are no info dumps, and a lot of information is left unstated.  The characters develop slowly, changing as the events of the book affect them.

The world is multicultural, though the focus remains on the three protagonists, each of whom live in very different places.  The majority of time is spent alternating between Valyn’s brutal training as a warrior and Kaden’s rather different, but equally brutal training to learn how to empty his mind.  While Adare gets fewer pages devoted to her story, it’s in no way less important to the plot or interesting to the reader.  Hers involves more political intrigue while her brothers’ tales have more blood and pain.

While the book employs familiar elements, the writing feels fresh and the ideas are cleverly used.  It’s a fantastic debut and I can’t wait to see what comes next in the story.
Email ThisBlogThis!Share to TwitterShare to FacebookShare to Pinterest
Posted by Jessica Strider at 11:38