Book Review: The Hangman's Replacement: The Sprout of Disruption by Taona Dumisani Chiveneko 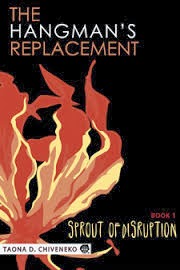 Cons: slow to reveal pertinent information, pronunciation guide at the end difficult to refer to in ebook format

I normally summarize books myself, but this one's got so much going on that I've decided to use the author's words.

Zimbabwe’s last hangman retired in 2004. As the nation drifted towards abolition, no determined effort was launched to find a replacement. However, the discovery of carnivorous flame lilies at the Great Zimbabwe monument triggered a spirited search for a new executioner. Those who know why this discovery energized the recruitment effort refused to talk.

The frantic attempts to find a new hangman were impeded by the lack of suitable candidates. Well-placed sources confirmed that the fear of ngozi was a deterrent. According to this traditional belief, the spirit of a murdered person torments the killer and his family for generations. However, this is only half the story. Several promising applicants did come forward. None met the minimum requirements for the job. The selection criteria were designed to exclude the mentally ill, the vindictive, and the sadistic. However, they did not rule out the desperate.

The Sprout of Disruption (Book 1) introduces the universe of characters whose lives have been set alight by the plant which sparked the recruitment effort. It tells the story of the aspiring hangman who was obsessed with securing the job, the sympathizers who fought to protect him from his prize, and the anxious men who believed that emptying death row would end their horror before the meat-eating plants constricted around their necks.

There's no protagonist in this book.  The story is told in stages from various character's points of view.  Each character's story - and subsequent conversation(s) - is directly or indirectly essential to piecing together the plot.  And there's a lot of piecing to do.  Characters and stories from the beginning of the novel that don't seem important show up later as important elements to the whole.  You learn a lot about each character, their background and the choice they have to make with regards to the novel's plot.  There's a LOT of backstory, but it's engagingly told and quick to read.

I loved the setting.  I know very little about Zimbabwe so that alone made this a fun read.  I loved that there were several strong female characters and characters from different walks of life.  There's a bordello mistress, a peasant farmer, a carpenter who creates gallows as a hobby, a professor of botany, some lawyers, lots of unsavoury characters, a genius etc.  I really liked the interview chapter (chapter 2) and the acknowledgement that a lack of education does not equal a lack of intelligence.

While the book has a meat eating plant, there's little else for the SF lover here, and the plant doesn't show up until the 100 page mark.  Once it does show up, it's mainly the impetus for the other events in the story, rather than a large element on its own.  SF aside, if you like mysteries, psychopaths and brilliant storytelling, there's plenty here to hold your interest.

I was particularly fond of the occasional bits of philosophical wisdom scattered throughout the book as well as the author's subtle sense of humour.  Take for example, these lines, "The man had a chocolate charisma.  Its low nutritional value did not stop people from eating it up."  It's not humour that will make you laugh out loud, but it will make you smile.  Another favourite is this passage:

"We could slash the law enforcement budget by ninety-nine percent.  We would only need a single police officer and a desk.  The officer's only job would be to say 'No!'

For the most part I didn't mind how slowly the book revealed the plot, as the story and characters were so interesting.  But around the 250 page mark I started to wonder when the plot was going to show up, only to discover I was already knee deep in it.  This is very much a novel designed to make you think.

My other 'complaint' is format related.  I started reading this on a Kobo, which isn't the best reader if you want to jump to the back of the book to look at the pronunciation guide.  It wasn't until I switched to the iPad that I was able to check how characters names were pronounced.  While it's standard to have this at the back of the book, in the ebook age, a short list at the beginning, next to the map, would have been fantastic.

There's a 16+ rating on the book that probably isn't necessary.  While violence is mentioned there's little on the page.  And while there are some bizarre sexual scenarios described there's nothing graphic or obscene.

This is the start of a series and I assume the flesh eating flame lilies will be more prominent in the later books.  This one was mostly set-up, but it was incredibly interesting set-up and I'm looking forward to the next book.