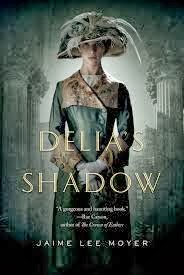 Delia Martin returns to San Francisco after a 3 year absence because the ghost that's been haunting her for the past 6 months demands it.  The ghost, which Delia calls shadow, seems to have a connection to a string of recent murders in the city.  The murder investigation is headed by Gabe Ryan, best man at the upcoming wedding of Delia's best friend, Sadie, and his partner Jack.

Set around the events of the Panama-Pacific International Exposition of 1915 the novel includes a mix of detective work and spiritualism as we see events from the alternating viewpoints of Delia and Gabe.

The romance is light hearted and grows organically from Delia and Gabe's interactions throughout the book.  In several ways the book reminded me of Mary Robinette Kowal's Shades of Milk and Honey, though the magic/paranormal elements here are more pronounced.

There are two maps of the fair grounds at the beginning of the book.  They're both black and white though one's an annotated line drawing and the other's a picture with text that is difficult to read.  For some reason the second map is upside down in relation to the first, making the places more challenging to line up.  There's no real need for the maps beyond giving a better image of the area some of the events take place in, so this is a cosmetic complaint as it doesn't detract from the text in any way.

This is a slow moving story, but by no means is it a slow read.  The dual mysteries of the murderer and Delia's shadow unfold at a quick pace, even as Delia and Gabe get to know each other better.

If you want a lot of action this isn't a good pick, but if you like well rounded characters living life and dealing with difficult circumstances, than you'll find this an enjoyable read.

(As an aside, if you want to read about a real serial killer that stalked a World's Fair, read Devil in the White City by Erik Larson.)
Email ThisBlogThis!Share to TwitterShare to FacebookShare to Pinterest
Posted by Jessica Strider at 09:00

I started reading this one the other day, but had to stop before I got into the meat of the story. What I did read was enough to make me look forward to picking it up again, so that's promising. I hope I enjoy it.