Congratulations to Matthew Mather, whose book, CyberStorm, has been optioned for film.  From the press release: 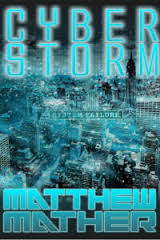 July 12th, 2013 - New York City - 20th Century Fox has acquired CyberStorm, a self-published book by Matthew Mather, with Chernin Entertainment taking on the role as producer.
Described as a frighteningly realistic depiction of what would happen in the event of a global digital meltdown from an organized attack, the book follows a New York man and his family as they try and survive the crash isolated in Manhattan with millions of scared and confused people around him.
The original e-book has caught on fast since it came out in March, and is now up there with the likes of the World War Z, Ender's Game and Game Of Thrones e-books in Amazon sales. It is the current #1 best-seller in the science fiction and tech-thriller categories on Amazon.
CyberStorm can be found here on Amazon:
...
Mather, a cybersecurity expert and author who started out his career working at the McGill Center for Intelligent Machines, is now exploring a traditional print publishing deal after inking rights pacts for Turkey, Spain and Germany. The Fox deal was made by Sean Daily at Hotchkiss and Associates with Paul Lucas at Janklow & Nesbit Associates.
Email ThisBlogThis!Share to TwitterShare to FacebookShare to Pinterest
Posted by Jessica Strider at 10:32