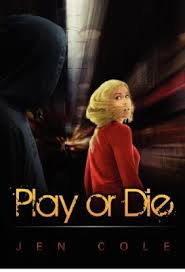 I received this book free during a promotion mentioned on SF Signal's daily Free SF, Fantasy and Horror feature.  There's a prejudice in the book industry against vanity presses that hasn't quite left me even though these books are now called 'self-published' or 'indie'.  While I've been trying to slowly break down my own snobbery, a few bad experiences with self-published books in the past have made me extremely wary of taking on such books for review.  Having said that, I have had some positive experiences lately that convinced me it's time to read one of the free Kindle books I've gotten over the last year.   The book blurb from Amazon for Play or Die was intriguing, so I decided to give this one a try.

Ready to play the game of your life?

Could you stay ahead of a sociopathic hunter being sent your co-ordinates every three hours? Jo Warrington is about to live this nightmare. On a Melbourne city street she is plunged into a game devised by people from the future. Her choices - play or die.

As Jo flees a remorseless Hunter, her watching audience places bets on how long she will survive and awards points for ingenuity. The points allow her to ask questions, but when the answer to one reveals her father's recent death to have been no accident, she resolves to play the game on her own terms.

Desperately searching for clues as the assassin closes in, Jo is tempted when her father’s sexy equipment salesman turns up asking her to trust him, but Richard seems to have his own agenda.

Can Jo track down her father’s murderers before she herself is killed? And what of her viewers from the future? Will they be satisfied with anything less than her death?
A lot can happen in five days.

The premise, that there's a future game show based on watching a hunter kill human prey, isn't unique.  A while back I read a short story by Robert Sheckley called "The Prize of Peril" with that exact premise.  (The story came out in 1960 and is available free online.)  There is, of course, The Hunger Games by Suzanne Collins, The Running Man (which I've yet to read) by Stephen King and others.  (And I should mention that while teens killing teens is the premise of Battle Royale, the 'game' in that book isn't televised so all the public learns is who the winner is at the end, so it's not quite the same thing.)

What Play or Die does differently is add two new elements.  First, in addition to being hunted, Jo learns that her father's recent death was murder, giving her something to investigate even as she's running from the hunter.  She uses Fitani to gain information about the murder, which is pretty gutsy given her position.  The second addition is information about those watching the game.  Normally these stories focus on the game itself with little, if any, information about how such shows became popular and what sorts of people enjoy watching them.  Jo asks about the people of the future, giving the reader a decent amount of information about how they live and why they're out for her blood. Later in the book there are more chapters that take place in the future fleshing out their world even more.

And the future Cole creates is quite plausible, given human nature.

Jo is a fantastic protagonist.  She's a highly intelligent 18 year old, who comes up with some very clever means of staying ahead of the hunter.  She does make several mistakes, which is only natural given her situation and the number of people who end up looking for her.  She feels real - trying to stay ahead, but aware that it's only a matter of time before she slips up and is caught.

I loved that the different plot threads eventually merged at the end, creating a cohesive whole.

Since the book is self-published and it's usually my first question I'll mention that I did notice a few typos and 2 or 3 minor grammatical errors.  On the whole the editing in this book was very well done.

My main complaints with the book were that there's one chapter towards the end of the book where two characters in the future are talking that's really an info dump for the reader.  While Cole avoids the telltale 'as you know', the characters do a weird 'tell me what you remember about X' conversation that feels off.  It's surprising because Cole otherwise was quite clever in how she gave information about the past, making this scene feel very out of place.

Also I got the feeling towards the end that the author didn't believe readers would get her message that it's bad how giant corporations are taking over small businesses because she has a conversation in which she gets downright preachy about it.  It's only one conversation but it's a stilted conversation as again, the characters are forced into an unnatural conversation style.  It's also unfortunate because the hammering home of the message is completely unnecessary.

All in all, it was a highly enjoyable read.  If you like dystopian fiction with some great chills and a few surprises, a touch of romance and social issues, then you'll like this book.