Last month Bookworm Blues (Sarah Chorn) posted a series of guest blogs on a very important - and under discussed  - topic: disabilities in science fiction and fantasy.  I'd started a reading list on this topic months ago, but couldn't figure out a way of displaying it without seeming condescending.  So I put my incomplete list aside and went on to do other displays.

Then Elspeth Cooper did this post on disability in fantasy, and Bookworm Blues decided to do her amazing blog series.  And Dan Goodman suggested the amazing, and respectful, title: Special Needs in Strange Worlds.  If you haven't read her posts, they start here and end here.  She also did a half way point round up with links, here, if you don't want to scroll through all the posts.  With the suggestions offered in the posts and a wonderful title, my endcap/reading list was back in business.

A few notes on this list.  First, it's incomplete.  This is a topic that to a large extent requires having read the book in order to know if the book fits the topic.  And it's impossible to read everything.  I've tried to categorize the books I had listed into general categories and then subdivided issues that had several books each.  Even then some books fit several categories, and some categories are flexible.  I tried to leave off the 'magical cure' books, but left the books with blind characters who have second sight as a compensation for losing their physical sight.  I also recognize that some of the books deal with disability in more detail than others.

I wasn't looking for mystery books, which is why there are only two (+ one from the comments), and only mentioned general fiction books I - and those I spoke to (at work and at home) - knew.

If you have a suggestion, please leave the title of the book, author and which category it fits.  I'll try to add them to the list.  If I get too many suggestions I may just let people read the comments to find more.

I'd meant to post this list at the end of May to somewhat co-incide with the Bookworm Blues posts, but I wanted an endcap, and that takes a month (from ordering the books until it's up).  This is an important issue and I wanted to bring it to the attention of more people. 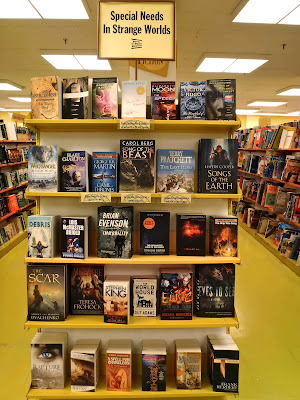 I wanted to credit those who helped bring this endcap to life, so I've mentioned them with shelf talkers on the display (at the World's Biggest Bookstore, Toronto).

SFX did a list, with several characters I missed and subsequently added, here.
Sarah Chorn (Bookworm Blues) did a post on SF Signal where she mentions several books on this topic.
Ada Hoffman has an excellent list of books containing autistic characters, many of which she has reviewed.  Do to the size of her list I've chosen not to add the titles here.

For some 2014 books, SF Signal has a reading list for you.

Email ThisBlogThis!Share to TwitterShare to FacebookShare to Pinterest
Posted by Jessica Strider at 12:05

Heaven's Shadow by David Goyer features an astronaut character in a wheelchair.

To me, The Magicians by Lev Grossman was a book about depression. I recognised so much of the ennui and dissatisfaction the main character had with his life, and it seemed like it couldn't possibly be about anything else. I'd definitely put it in the "depression" list.

How about Blindness by Jose Saramago in the "blindness" section :P

Thanks for the suggestions, I've added the books. @RedEye - I've added it to general fiction (since that's where we shelve Saramago in the store).

one note, regarding your list of books: "blindness" is by jose saramago!

Whoops! Thanks for catching that. Good grief. I knew that. Guess I was tired when I added that book in. :P

This Alien Shore by C.S. Friedman features one main character who is a multiple and another one who seems to be a high-functioning autistic. So I guess that would go under both Mental Issues and Autism.

A Wizard Alone by Diane Duane features an autistic character, who does not then disappear from the following books but continues to be an active character.

And of course after I post I think of another one. Persistence of Vision by John Varley, under Blindness. Especially notable because it postulates an entire society of blind people, in which the sighted protagonist finds himself at a disadvantage.

There was an early 1930s mystery series about a detective, blinded in WWI, by Baynard Kendrick. The first is called You Die Today! Some were in print in the early 70s when a TV series very loosely based on it, Longstreet, ran for one season. The book series publicized seeing eye dogs, which were a new innovation.

That's one heck of a comprehensive list! I've only read a fraction of the books listed, and probably seen even fewer of the TV shows and movies, but this gives me an excellent place to start with finding some more good representation in fantasy and sci-fi. Thanks!

Also, I want to visit your bookstore! Maybe at some point I'll have to take a trip out of the dull Maritimes and come browse the aisles for a while. :)

Such a super cool idea to actually display these in the bookstore this way. Nicely done! Would be cool if there could be some local media tie-in to get people into your store to see the display. Thanks for doing this and for also posting about it.

Thanks for all the new comments! I'll add the books mentioned when I get a chance this coming week (I'm currently at work and will be working a bit extra this week due to a holiday).

@Bibliotropic - unfortunately the World's Biggest Bookstore is closing next month, so you'd have to visit soon. The SFF section still looks pretty good but we don't have the selection we used to.

@Carl - the display isn't up anymore. This post originally went up in June of 2012. And with the store closing, I can't redo it (can't order books in and there aren't enough of these left for a new display).

I will try to keep updating this list as I come across new titles.

Should Spell for Chameleon really be on there? The whole point of the story is that the character with "magical issues" actually has EVEN BIGGER POWERS than everybody else, so it's a pretty broken aesop. Plus, there's a huge amount of uber-creepy rape in it:

Grim-faced, looking betrayed, the three girls shook their heads, no. Bink felt sorry for his opposite. How could she avoid being seductive? She was a creature constructed for no other visible purpose than ra--than love. (pg. 57)

Note: Bink is the HERO of this story. The beautiful woman becomes his wife.

The book Lost & Found by J. Sheehan has a character with synesthesia. Thanks, Carlamm

Thanks for the new titles, I've added them to the list.

@LBT - Several of the books on the list are controversial. Since Xanth is a realm of magic, Bink's lack of magic (perceived as it is), is seen a disability by him and those of his society. Thinking about it now, disability can be as much a perception as a description of actual ability.

In certain comic Hawk eye / Clint Barton is hard of hearing. Apparently it going to come up in the current ongoing series.