Notes From an Author Talk on Disability

Two days ago I worked an offsite for the store, where we take books to another location and sell them for the speaker.  As often happens, I didn't know much about the author or the book before going.  Unlike many of these talks, I was actually able to listen in.  And it's a topic I'd like to share.

The book was The Boy in the Moon written by Ian Brown, an award winning journalist for the Globe and Mail newspaper.  Sixteen years ago his son, Walker, was born with a rare genetic disease, CFC (cardiofaciocutaneous syndrome).  This syndrome is so rare it's estimated that only about 150 people worldwide have it.  His son is able to walk and emote, but cannot speak or swallow properly (he's fed via a tube).

This isn't the first author talk I've heard that I enjoyed, but it is one of the first where I took notes.  Please be aware that my comments are all paraphrased, despite how thorough I tried to be with jotting things down.  I've tried to keep the meaning of what he said, if not the exact words.  Parts in brackets are my own thoughts/comments/clarifications.
-------- 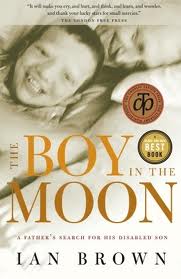 While writing the book he mentioned that he had a lot of trouble with it.  When he started he didn't write what was true, he wrote what he wanted to be true.  Political correctness encourages this. [I was hoping he'd elaborate on this point but he didn't.]  It was only by describing Walker as he is, that it worked.  It was only when he stopped trying to make the boy sound 'normal', or when he stopped comparing Walker's actions and life to 'normality' that he was able to get at the truth of his son's life.

He used to think of Walker by way of comparison.  Why does he do that?  Why is he not normal?  He finally realized he should have been thinking 'he is this way' and interacting with his son as he is.  In other words, you need to pay attention to the present, to what is and not to what should be.

Disabled people are enormously important for social and empathetic abilities.  Fragility isn't the opposite of strength.  It forces us to think outside the box, outside the status quo.  They are also a reminder that we are not solely the product of our own doing.  For example, there is a bond of solidarity between the wealthy and the poor, even if the wealthy don't want to acknowledge that.

Our society is a meritocracy, meaning you only have worth if you merit it [via the markers of success: wealth, status, fame, etc.].  In our society success is the only crown of virtue even though the wealthy aren't necessarily wealthy because of their own actions nor the famous necessarily famous because they deserve to be.

He mentioned that pre-natal testing for disability made him nervous.  After their son was several years old he asked his wife if, knowing Walker would be born disabled, she would have had an abortion.  Her answer was yes.  Mr. Brown then reminded her that that would mean they wouldn't have Walker, to which she replied that it wasn't fair to say that, now that she knew their son.  That a fetus was unknown and unformed.  Their son was a person.

Things like pre-natal testing only emphasizes perfection, they don't make room for chance.  "Chace is also gracious and generous."

He mentioned that group homes for the disabled in Canada focus on trying to make the lives of the disable as 'normal' as possible.  There's an organization in France, L'Arche, that does things the opposite way.  There, the disabled are able to live as they are, and visitors follow their way of doing things.

[He concluded with two thoughts, first by paraphrasing the ending of Paradise Lost, when Adam and Eve are kicked out of the garden of Eden.]

You must find Paradise in yourself by seeing things as they really are.  This requires admitting what we can't do before discovering what we can.

The effort to accept the disabled as our equals, with a contribution to make, means we'd have to redefine what it means to be a success.  That struggle - to be considered equal -  is the cause of any repressed people.  It is always a struggle to not be thought of as one single, limiting idea - in this case disabled.

--------
It was a very insightful talk, and one I think more people should hear.  It made me wonder, and not the first time, if terminology - or political correctness - causes more problems then it helps.  I can understand why it's important, but I wonder if, rather than solving problems, it just ignores the problem by creating new terms that keep people apart.  For example, I wondered a few months back what the most accepted (and accepting) term for the LGTBQ community was.  But how do you ask that if you don't already know the answer?  How do you talk about it without insulting someone simply by asking the question? (Or how do you push past the fear that you will insult someone by asking the question to ask the question?)  How do I learn what it's like to raise a disabled child if I'm afraid of insulting the parents who have the experience?  If I'm afraid the words I use to ask my questions will be wrong?  And how does creating PC terms help when in 20 years those will be the new slurs used to insult the group it's supposed to empower?

The idea of pre-natal screening brings up an interesting - and difficult - issue as well.  In the past, people with severe disabilities simply died.  It takes a lot of medical care to keep some people alive.  The question is then, should they be kept alive?  Should they even be born in the first place?

I read an article (that night) in Chatelaine (we got a free subscription and I'm finding I enjoy the magazine more than I expected to).  The article was about a couple who wanted their child but were told he would be born handicapped.  It focused on the new laws in the States that require the woman to have extra procedures done before the abortion can take place - and how devastating it was to go through those procedures after already having to make a heart wrenching decision.  Now, I'm not a fan of abortion but I am a proponent for the idea that a woman's body is her own and that only she has the right (with her significant other) to decide if she wants to have a baby or not or to abort or not.  And who can tell a couple that they should dedicate the rest of their lives to caring full time for a child who can't care for him/herself?

It's a tough call.  I can't even begin to imagine how difficult it would be to want a child and decide to abort because the child will face a challenging life.  A life many people would question the worth of.

It's a decision my parents had to make when my mother was pregnant with me.  She caught the mumps and was told that her unborn child would likely be disabled because of it.  She was advised to abort.  After thinking - and praying - about it, my parents decided to take their chances.  And I was born, fully formed and perfectly healthy.  I imagine the tests they do now are more exact, but still, mistakes are made, muddling an already difficult issue.

I'm not looking for a pro/con discussion here about pre-natal testing, abortion or anything else.  I liked Mr. Brown's thoughts on perfection, on acceptance, on 'normality' and wanted to share them.  If you want to hear him talk about his son (at different ages), here are some interviews he's done.

And here's a link to L'Arche International, if you'd like to learn more about that organization. Their main page states the following:

Now operating in 40 different countries round the world, L'Arche works closely with people with an intellectual disability so that each person can play their full role in society.

Turning dreams to reality, each of our 137 L'Arche communities is a springboard of opportunity where members with and without disabilities get customised support to discover, develop and share their unique - and often hidden- talents.

Individuals are invited to share fully in community life, in both residential and non-residential settings, as suited to specific needs and hopes. More than just inclusion, it is about making the most of life! We welcome you to our network. Together we can make it happen.

Email ThisBlogThis!Share to TwitterShare to FacebookShare to Pinterest
Posted by Jessica Strider at 13:09