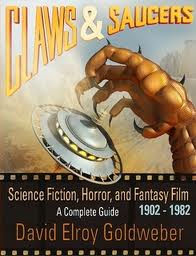 Pros: covers a LOT of movies, lots of cross-referencing, lots of interesting information about the films, directors, actors and DVD extras, spoiler warnings

Unlike most books, I did not read this through cover to cover.  After reading the introduction and the interesting films by decade feature, I started by reading reviews of films I've seen to get an idea of how the author approaches reviews and how my tastes/opinions matched his.  After that, I randomly flipped through the book and came away with so many movie suggestions I was afraid I'd miss interesting films, and so started at the beginning.  I then read reviews at random throughout the whole book.  And created a large list of movies to watch and short stories to read.

The book covers a LOT of movies.  There are over 1500 entries.  The author mentions a few adventure films (like the 1932 The Most Dangerous Game) but not Disney films, James Bond films or others that stray too far from the genre lines.  He gives a good explanation of what is in and out of the book at the beginning.

The author defers commentary on famous films, assuming the reader knows something about them, or is willing to look elsewhere for information if he/she doesn't.  Instead, for those films he often give stories - when he first saw the film, how he felt about it then vs now.  For example, with Jaws he gives some facts about great white sharks.

In other cases, the information he gives is fantastic.  For example, King Kong.  He sets the film in its place historically, critiques it with regards to other works (the score, the special effects), mentions the features worth watching on the bonus DVD, facts about the director, etc..  He also mentions when the movie is based on or has a connection to a short story (like Aliens' connection to the short story "The Black Destroyer" by A. E. Van Vogt), or comics that would appeal to people who like particular movies.

Despite the negatives, the book is fantastic value given all the movies it mentions.  The paperback is available through Lulu and priced at $45.95, which sounds like a lot until you consider its size.  Don't want to pay that much, then get the ebook for only $8.95 on Lulu (epub format) or 7.99 at the iTunes store.  (The author's website states that the book will be available from Amazon, but I was unable to find listings for it there.)

Want to check out the guide for yourself before you buy it?  The author's put up the entire "C" listing on his website.

Email ThisBlogThis!Share to TwitterShare to FacebookShare to Pinterest
Posted by Jessica Strider at 11:17