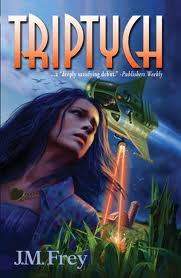 Cons: lots of time spent exploring sex (how humans and aliens differ), don't learn that much about the alien culture or technology


The novel is told in three parts by three narrators: Evvie, who survives an alien attack, Kalp, an alien and Dr. Basil Grey, a specialist at the Institute.  The book begins in media res with the shooting death of Kalp.   Readers are given little context for the murder, being told only that he was a traitor, and must quickly piece together what's happening from the clues provided.

When Basil and his wife, Gwen, use a piece of alien technology somehow connected with Kalp's death, they find themselves transported not to another location on Earth, as expected, but to another TIME on Earth.  1983, to be exact.  There they foil the murder of Gwen as an infant, and must figure out what's really going on with the aliens and who the real traitor at the Institute is.

The writing is very crisp and detailed, yet not verbose. The author gives each narrator their own voice. Evvie, for example, has a quirky sense of humour and edits her thoughts.

What would Miss Manners have to say about vanquished alien invaders? Meeting your own adult children decades too early? Was Evvie supposed to offer tea? Cookies?
(Sanity?)


Kalp's narrative was the most interesting, as the reader is introduced to alien ways of thinking and acting. Information is given by way of comparison with regards to how humans act, rather then directly explaining the aliens.

Their shoulders are jagged and straight, unlike his, their limbs awkward, with only three easy-to-snap joints. They look like they shouldn't even be able to walk upright, their toes don't spread out far enough. And yet there they are, face to face with him, balancing.


The novel spent longer delving into the sexual relationship of the characters (the alien 3 person aglunate vs humanity's 2 person marriage). After a while it became less interesting and this reader would have liked to learn more detailed information about other aspects of the alien homeworld and technology. For example, you learn that the aliens use a hierarchy, but not much about it beyond where Kalp stands with regards to some of the other aliens in the dorm they share.

The time travel plot was handled with care, and everything tied up properly at the end.  It was surprising that the characters didn't use the device to fix the horrible times in their past (of which there were several), but understandable as well, given how unpredictable changing one past act could be.

This reviewer figured out who the traitor was well before the end of the book.  Knowing it didn't reduce reading enjoyment, though at times it seemed the characters should have picked up on some of the clues faster than they did.

If you like a lot of human interest in your time travel and alien contact stories, give this a try.