Before this week the only silent movie I'd seen was a non-restored cut of Fritz Lang's Metropolis.  After seeing three more films, here are some general impressions I've made about silent films:

1) for complicated stories title cards are necessary to understand the plot (Frankenstein and Dr Jekyll); for simplistic plots they're unnecessary (Le Voyage Dans La Lune)
2) once you've read the title card, grand gestures by the actors get other aspects of the film across
3) music really makes a difference (two of the films I saw were completely silent, one - Frankenstein - had an added soundtrack.  The music increased the tension by marking when the monster appeared and reducing tension for the scenes with Frankenstein's sweetheart.
4) they tended to be quite short and so had to distill the essence of the stories, removing character development *

Now on to more specific observations about the films themselves. 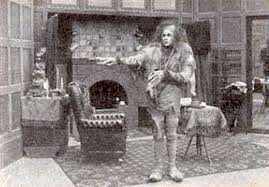 Victor Frankenstein creates a monster that then haunts him and threatens his sweetheart.

Frankenstein (at least the version I saw) is a black and white film with some tinted images.  Yellow tints were used for scenes with the monster, a light purple for scenes with Frankenstein's lady love and blue when the creature attacks.  Even if you know the story, you'll need the title cards to understand what's happening.  The creation of the monster is done very differently from both the book and later films (a slowly built up skeleton standing in a cauldron).  The monster itself looks different (seen above) and causes much less damage to Frankenstein.

The mood is very tense during the creation scene and again when the monster visits Frankenstein at his home.  There's no development of the creature, no intelligence such as it shows in the novel.  In fact, the film sort of ends with no resolution.

Still, it's only 16 minutes, and worth a look if you're interested in film history or monster movies.

A group of men make a rocket and travel to the moon, fight the creatures living there, and return home.

Originator of one of the most iconic images in science fiction film history, the movie itself is short (14 minutes), and yet at the same time, too long.  As it uses no title cards everything must be explained via gestures - and the movie really drives its point, having each scene drag on longer than necessary.  The moon people are men wearing bird style masks and crab claws and look pretty cheesy, but the woman in the moon is a nice set design.

Interesting only as a curiosity, it certainly shows why moving pictures captured the imagination but isn't that interesting to watch.  Perhaps a soundtrack (played in theatres but missing here) would have improved it? 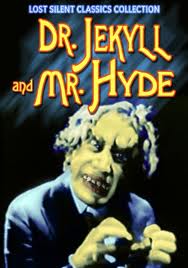 Kind Dr. Jekyll tests a solution that transforms him to the deformed and malicious Mr. Hyde.

By far the longest of these three picks, Dr. Jekyll clocks in at a whopping 26 minutes.  This allows it to do what the other two films didn't have time for - add character.  To Hyde that is.  Jekyll isn't given much time, just a scene (and card) to show he does charity work.  From then on, the actor is mostly Hyde, who does horrible things that Jekyll must pay for (generally with money).

The plot actually develops well and the transformation between Jekyll and Hyde is well done and frankly scary (the actor, King Baggot, stoops and changes his mannerisms, rather than using make-up).  There's also more subtlety with the acting.  It's all still wide gestures, but you can better see the despair in Jekyll as he realizes Hyde is taking over as well as Hyde's joy in wanton destruction.

Of the three films here, I'd recommend this one the most.

* This holds true for the three films reviewed here and other early silent films, but later silent films were feature length, like Nosferatu.
Email ThisBlogThis!Share to TwitterShare to FacebookShare to Pinterest
Posted by Jessica Strider at 12:19

I know this isn't a sci-fi silent film, but when you get the chance, you should see "City Lights". It does have a score (written by Chaplin himself, if I recall) and it's considered one of silent film's last great hurrahs. The closing scene is absolutely lovely.

You've also reminded me of a book I read on fairy tale adaptions a few years ago. A Charlie Chaplin film was mentioned in it... now I need to figure out which one and add that to my list of films to see too.