Book Review: A Shadow in Summer by Daniel Abraham 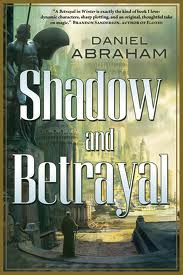 (part one of the Shadow and Betrayal Omnibus)

Otah Machi, sixth son of the Khai Machi, gives up his chance to become a poet and leaves the training school he was sent to without a brand, in order to make his own way in life.  Years later, one of Otah's pupils, Maati, comes to Saraykeht to apprentice with its poet.  Poets keep Andat, spirits made flesh who perform particular tasks.  Saraykeht's Andat, Seedless, helps with the cotton trade.  The Andat does not wish to be a slave and has plotted to bring his poet down.

Otah has built a new life for himself in Saraykeht, with a powerful trading house and a woman he loves.  But everything changes when the overseer of the house finds out about Seedless's plot.

This is a very complex book.  There are plots within plots and it's hard to know what will happen next.  I loved all of the characters.  Each one felt like a real person, with problems and strengths.  In fact, when Maati makes a decision that would normally have angered me, in this book, it worked.  I felt sorry for the characters involved and understood their complicated emotions when things went wrong.

The world also felt real.  Abraham created a complex vocabulary of hand gestures meant to explain one person's rank in relation to another's, to ask questions, to give thanks.  There's a flourishing bath culture for escaping the heat of the day as well as for doing business and learning gossip.  The court ceremony and trade bureaucracy are intricate and time intensive.  Though the greater politics between nations is only touched on in this volume, I expect it to show up more in later books.

Seeing the characters as real people made the ending difficult as I didn't like some of the choices they ultimately made.  The good thing about having a two in one volume is that it's natural to keep reading, where I might otherwise have stopped, having enjoyed the book but not being sure I want to learn what happens next (as I suspect it will be bad).
Email ThisBlogThis!Share to TwitterShare to FacebookShare to Pinterest
Posted by Jessica Strider at 12:22

It's a really interesting series...I really need to read Dragon's Path even if I understand its far more "conventional" in structure.

I really liked the Dragon's Path, which is why I'm reading his first series. I liked the ending of A Betrayal in Winter, so I'm hoping to get to the last two books in the series... (Jessica looks at her to be read list and ponders when she'll have time to finish this series)... soon-ish. Lots to read.

I think Abraham does two things exceptionally well, make realistic characters and realistic worlds. And good plots, which is an important third skill. Maybe I should try his urban fantasy too. I haven't read urban fantasy in a while.

Agreed. I have the first those on my Kindle, too, unread...