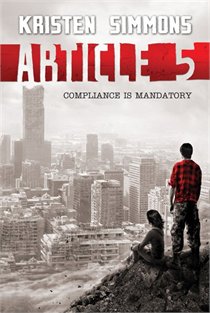 Pros: protagonist shows real growth at the end of the book, spunky heroine
Cons: heroine is surprisingly naive given her age and circumstances, willful misunderstandings between Ember and Chase that complicate their interactions and romance, minimal worldbuilding
For Parents: no swearing, no sexual content, some violence (corporal punishment, off stage executions)
Ember's world is shattered when her mother is arrested on an Article 5 violation, putting Ember into the custody of the state.  She is desperate to escape her new home, reform school, and help her mother at all costs.  Meanwhile she wonders at the betrayal of her closest friend, and first love, Chase, who was drafted into the army and was one of the arresting officers who took her mother away.
While I imagine teens will love Ember, she's feisty and won't back down from defending her rights, most adults will find her attitude tiresome.  Yes, you can argue that she's doing the right thing by fighting back, but she's not doing the SMART thing.  The smart thing at the reform school would have been to lay low and find out how things work before planning an escape attempt.  Instead she draws attention to herself right away, so she's watched more carefully - making it harder to escape and bringing down draconian punishments on herself.
Having said that, the ending is that much better as you finally see her realize that there's a time to fight and a time to watch and plan.  And while her plan comes off better than I believe it would have in real life, I felt proud of Ember for growing up and learning this very important lesson.
Part of her rebelliousness shows in her relationship with Chase.  Both characters complicate their interactions and their own feelings by willfully misrepresenting their circumstances (Chase lying about how he was treated in the army for example).  I understood why Chase didn't tell her what happened to her mother but I was amazed that she didn't figure it out.  And a lot of Ember's actions relied on spur of the moment decisions based on fear rather than planned actions.
Finally, Ember is very clueless about her world, and that shows up in the minor worldbuilding.  We're told of the war that has allowed the President to corrupt the US using the Statues of Morality, but we aren't told who the war was against or why it was fought, nor do we learn if there was opposition to the Statues, etc., etc..
The ending made the book worth reading, but I suspect many adults will not make it that far.  This is one for teens - and they'll love it.
Email ThisBlogThis!Share to TwitterShare to FacebookShare to Pinterest
Posted by Jessica Strider at 11:23

Omg cant wait to read this book! I'm so in to dystopian genre these days and I cannot pass this one. You made me more excited im hyped up :) Great review .