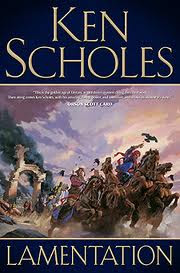 Rudolfo, Lord of the Ninefold Forest Houses, General of the Wandering Army, is touring his lands when the Desolation occurs. Little does he realize how his life was manipulated with this future act in mind.

Jim Li Tan, 42nd daughter of merchant and spy Lord Vlad Li Tam, is consort to Sethbert, Overseer of the Entrolusian City States. She has just seen him boast of causing the destruction of Windwir, and with it the Androfrancine Order of priests. Her orders from her father to watch this man are about to change.

Neb's mistake caused his absentee father to be in the city when fire rained down upon it. He is the only witness to the destruction.

Petronus is a fisherman who was once much, much more. His quiet life is ruined when he spots the pillar of smoke in the distance. For his path has also been manipulated and it is now his time to act.

These four and many others find their lives irrevocably changed by the sudden destruction of the Guardians of the Light. And it slowly becomes clear that many people have been set up to act during these trying times. But set up by whom and for what purpose?

This is a fantastic book. The first half of the novel is predominantly character driven. Some people might find this portion slow going. But the interesting, fully realized characters (with wildly different backgrounds, customs and secret codes) kept me entertained until the plot picked up.

Magic is used sparingly and for specific purposes. More interesting are the various codes used by the different powers (smudged words on letters, non verbal languages, etc). And once the intrigue begins, so does the tension, making the ending move quickly.

Three dimensional characters, mild use of magic and political intrigue make this a great start to an epic series.
Email ThisBlogThis!Share to TwitterShare to FacebookShare to Pinterest
Posted by Jessica Strider at 10:00