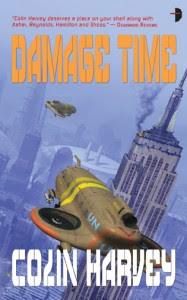 Forty years from now Detective Pete Shah is about to retire from the NYPD. He works as a memory retrieval specialist; we now have the technology to upload memories onto the net, but some criminals like to hurt their memories' donors, and it's Shah's job to find out who they are. BUT NYC is near bankrupt and with three weeks to go, Shah finds that his retirement date has been put off by five years. Depressed and angry, Shah goes to a bar where he meets a girl -- and the next morning her body is pulled from the East River. All the evidence seems to point to Shah being the killer. And later on, when he becomes even more of a threat, the criminals attack him and strip him of his memories, and Pete Shah has to learn how to become who he is all over again.

At the risk of sounding like I'm dodging the bullet (LOL), they're both challenges. Good SF has to stand up to known constraints, whereas often fantasy worlds have be built from the ground up.

> What was it like to be on the grant committee for the Speculative Literature Foundation?

I've always liked writing, ever since I was eight or nine. Like many writers, I need to write something and to write every day. I can't imagine any other job where I get to fulfill those needs.

Generally, it's whoever the protagonist of my latest book is! Seriously, I identify a lot with Pete Shah, with his struggles to do the right thing, and his doubts about his life -- but his inability to change it. I think that we've all felt like that at times - haven't you?

At times, I'd change with any and all of them. Wouldn't it be great to walk or ride across an alien world? Wouldn't you like to know now what the world's going to be like in forty years time? Or a thousand? 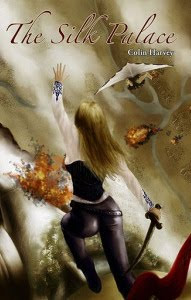 > What was the first novel, published or unpublished, that you wrote and how long did it take to write it?

My first novel -Vengeance- was written between 1998 and 2001, and then revised in 2005. I describe it as a mix of Agatha Christie and Jack Vance, with a little spaghetti western thrown in!

>What was the hardest scene for you to write?

They were all hard at that stage!

I'm studying for a BA in Creative Writing, made up of lots of different modules. Last year I wrote poetry, which helps with the precision, and scriptwriting, which helps to work out how late in the story a writer can start. But every module helps in some way or another. I'm taking Film Making, which gives me an insight into how the film industry works, and Genre, which helped me understand my own writing. I'd recommend anyone who is thinking of writing for a living to take such a course -- it tilts the odds of being published enormously in your favour. But also, if like me, you love to write, it's just a great thing to do.

I try to write in the mornings, between seven and twelve; I write at home. But I also write on bus or train journeys -- it's that or read, or stare out of the window, and of the three things I know which is most productive.

Worst thing; when you hit that writing equivalent of the marathon-runner's wall. It's usually half to two-thirds through a novel. Best thing; when it's finished, and the work is as good as you can make it.

How much is involved in the industry other than writing! You have to be part salesman, part bookkeeper (yes, I have an accountant, but still, I have to keep records, and accountants don't chase payments), and part promoter as well as a writer. More and more writers are expected to be out there, promoting their books. 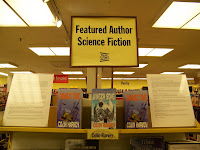 Write. Write every day. A little every day is better than a big splurge once a week. But the only way to improve is to write and to listen to feedback.

Just try to take the pressure off yourself. Write nonsense for five minutes before you start writing, to warm up a little. Take writing one word, one sentence, one paragraph, one scene at a time.

But even so it's a great life.

Email ThisBlogThis!Share to TwitterShare to FacebookShare to Pinterest
Posted by Jessica Strider at 11:51