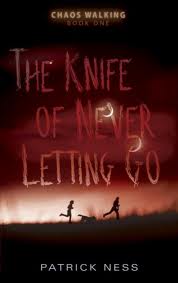 Pros: high tension, action packed, interesting concept, character growth, good use of literary techniques to achieve the above, great message, you'll be left reaching for the next book in the series

Cons: There's some violence, so it's rated 14 and up, some actual swearing (and lots of 'fake' swearing),  for stronger teen readers

Todd Hewitt is 30 days from his 13th birthday.  Thirty days from becoming a man when he and his dog Manchee come across something they've never encountered before.  Silence.

This encounter turns Todd's world upside down, as everything he thought he knew about his world is brought into question.  He's forced to flee with the source of the silence in an attempt to find answers and safety from the men of Prentisstown.  Men who are finally putting into motion a plan they've been brewing for years.

Patrick Ness is a master of the craft.  He uses first person to get the reader into Todd's head and, despite the Noise, Todd and those around him manage to keep secrets - from each other and the reader.

Repetition is used for emphasis, while clipped phrases are a means of ratcheting up the tension.  Ness also cleverly sidesteps the use of profanity by using 'effing', while letting the reader know the boy isn't REALLY saying 'effing'.

Every time you get close to understanding what's going on something else happens, forcing Todd further along his journey, and pulling the reader along for the ride.

There's also a great message towards the end.  And you'll want the sequel on hand when you finish this one.

This is one of the best teen books I've ever read.  It's great for both teens and adults, and you'll be hard pressed not to read on.
Email ThisBlogThis!Share to TwitterShare to FacebookShare to Pinterest
Posted by Jessica Strider at 15:04