While this is a list of cover types I personally don't like, I bet if you ask other booksellers they'll agree that they hate at least a few of these types. I'm not saying these covers are bad, I'm just saying that sometimes books get covers that don't help sales (which is what a cover is supposed to do) because the bookseller doesn't like it or because it doesn't properly portray what the book's about. And please remember, authors have little to no control over the covers of their books.

1) This post came out of my remembrance of a cover so unbearably flourescent that, though we had several copies, we spined them because it was simply too bright to face out. Unfortunately I can't remember which book that was, but I came up with a few others. Flourescents are used a lot, because they draw attention. Most of the time they're fine, but sometimes you get one where the paper is too bright or the picture/text doesn't cover enough of the front and the paper blinds the booksellers.

2) The second category annoys me particularly because I have a history degree. It's covers that are misleading about their subject matter. The first is a novel I've got an example for is about "Katherine Swynford and John of Gaunt, Duke of Lancaster, the ancestors of most of the British royal family." (Quoted from the description of the book from the Chapters website.) The original cover (it was later changed) is the rather famous painting of Guenevere knighting Sir Lancelot. This naturally makes one think the book has an Arthurian theme. The second book, Saving Grace by Julie Garwood, takes place in Scotland but has Neuschwanstein, a German castle, on the cover.

I also don't like covers that make you guess the genre. Elantris, a fantasy novel, looked like science fiction when it first came in, and Living With Ghosts, also a fantasy, looked like urban fantasy.

Or covers that look like they're for children but are actually adult novels. (I could only think of one, but I know there are others.)

3) Books with cutouts on the cover. These are annoying because they constantly rip. I remember doing an off site where we couldn't find a copy of A Whole New Mind that wasn't torn. (The head for A Whole New Mind, and the circle around the lion's head are the cutouts sections.)

4) Trade paperback books with flaps for author bio and book description. These never sit on the shelf properly, making the covers hard to see/read. Here's a picture of one I own. 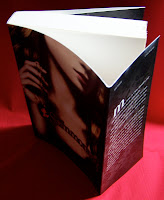 5) The worst offenders are covers that take titles that are already suggestive and play that aspect up, until it's overkill. They also tend to be books that, due to the covers, I'd be unlikely to read on the subway and are therefore harder to hand sell. (The third book is Diary of a Manhattan Call Girl, and yes, those are condoms making up the eyes.)