Book Review: A Song With Teeth by T. Frohock

This is the third novel in the series, and though they are designed so you can read each book independently, you do get more out of the by reading them in order as the characters and some story arcs continue from earlier books. The author does include a quick spoiler free synopsis of prior books if you do decide to skip ahead. You can find my reviews of the previous novellas and books here: 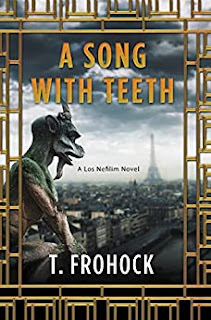 It’s 1943 and the Nazi’s have occupied France. Los Nefilim lost the Spanish civil war and are helping with the French resistance. Diago is acting as a double agent with his daimon-kin and running several lines of spies. Ysabel is sent to retrieve important manuscript pages that carry parts of a spell that will help the allies in their planned invasion. Meanwhile Guillermo’s brother is consolidating his power as the new leader of Die Nefilim.

It’s a slow-burn spy novel that gives each character several unforseen twists to their story.

The background is complex and there is some terminology you need to learn (there’s a glossary at the back to help you out). The books deal with angels, daimons, and nefilim (or nephilim) the offspring of humans and angels/daimons.

While there are some disturbing scenes, they’re short and important to the story, like Nico’s time at a concentration camp.

It feels rare to see loving relationships in SF/F so to get two in this series was wonderful. Diago and Miquel have something special. They’re such good parents and handle the trials they’re dealt with love and compassion. Similarly Guillermo and Juanita also have a great relationship, and have raised Ysabel to be a good leader. Having the kids reflect on what their parents taught them about handling fear and acting calm under pressure was really cool.

This is a great series. It can be hard to take all at once (there’s one off page rape that’s central to the story and several on page scenes of torture), but it’s also got some brilliant family love (both straight and queer). If you’re looking for strong relationships and interesting spy stories in a historical setting, pick these up.
Email ThisBlogThis!Share to TwitterShare to FacebookShare to Pinterest
Posted by Jessica Strider at 10:25