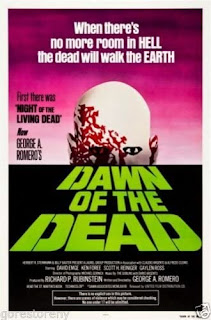 The dead walk the earth and cities are trying to mitigate their spread. But some people doubt what's going on and don't want to hand over their departed loved ones.

After a harrowing escape from an increasingly overrun city, four people take refuge in an abandoned mall.

I was impressed by Night of the Living Dead, which I watched a few years ago and wanted to continue the series. And this film holds up shockingly well. There were a few scenes I might have thought unrealistic or over the top before living through the Covid pandemic. Now, it’s impressive how true to life the film is.
The story does a good job of setting up the 4 protagonists. You watch them in harrowing circumstances, in downtime, and slowly falling apart due to the constant stress. The actors are great.
I watched the ‘complete cut’, which apparently added back some character development scenes and gore to the theatrical version. There was some gore, but only once scene (towards the end of the film) seemed gratuitous. Though it was 2 1/2 hours long it never really dragged. There were some tense moments, some subversions to expectations, and some genuinely sweet moments when things were calm.

The film made some very cutting remarks about politics and racism at the time (and our current time, as it turns out). I loved that one of the protagonists was a black man who was by far the most competent of the bunch. I also liked that the woman refused to be ‘den mother’ to the guys.

The special effects were basically just make-up and done very well. There is a lot of violence, especially at the beginning and end of the film.

It’s a good movie. It’s great when older stuff holds up well, though a bit sad we haven’t progressed much as a society from the lessons it was trying to teach.
Email ThisBlogThis!Share to TwitterShare to FacebookShare to Pinterest
Posted by Jessica Strider at 09:52