Many thanks as always to the publishers who sent my books over the past few months.

The Undertakers by Nicole Glover - This is the second book in Glover's Murder & Magic series. I loved The Conductors and really enjoyed this book as well. My review, and the book, will be out November 9th. 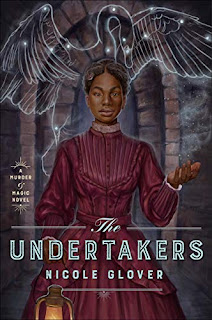 Nothing bothers Hetty and Benjy Rhodes more than a case where the answers, motives, and the murder itself feel a bit too neat. Raimond Duval, a victim of one of the many fires that have erupted recently in Philadelphia, is officially declared dead after the accident, but Hetty and Benjy’s investigation points to a powerful Fire Company known to let homes in the Black community burn to the ground. Before long, another death breathes new life into the Duval investigation: Raimond’s son, Valentine, is also found dead.

Finding themselves with the dubious honor of taking on Valentine Duval as their first major funeral, it becomes clear that his passing was intentional. Valentine and his father’s deaths are connected, and the recent fires plaguing the city might be more linked to recent community events than Hetty and Benji originally thought.

The Undertakers continues the adventures of murder and magic, where even the most powerful enchantments can’t always protect you from the ghosts of the past . . .

The Offset by Calder Szewczak - The premise here sounds so interesting, and reminds me a bit of Neal Shusterman's Unwind, which I liked.   Out September 14th. It is your eighteenth birthday and one of your parents must die. You are the one who decides. Who do you pick?

In a dying world, the Offset ceremony has been introduced to counteract and discourage procreation. It is a rule that is simultaneously accepted, celebrated and abhorred. But in this world, survival demands sacrifice so for every birth, there must be a death.

Professor Jac Boltanski is leading Project Salix, a ground-breaking new mission to save the world by replanting radioactive Greenland with genetically-modified willow trees. But things aren’t working out and there are discrepancies in the data. Has someone intervened to sabotage her life’s work?

In the meantime, her daughter Miri, an anti-natalist, has run away from home. Days before their Offset ceremony where one of her mothers must be sentenced to death, she is brought back against her will following a run-in with the law. Which parent will Miri pick to die: the one she loves, or the one she hates who is working to save the world?

Email ThisBlogThis!Share to TwitterShare to FacebookShare to Pinterest
Posted by Jessica Strider at 09:35