Book Review: We Have Always Been Here by Lena Nguyen 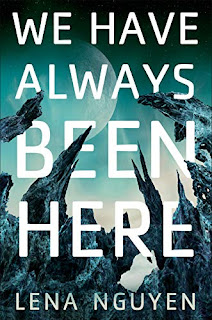 Grace Park is the Orbiter on the spaceship Deucalion, a psychologist sent to monitor the crew on their mission to scout out a newly discovered planet and prepare it for colonization. Her role, her standoffishness and the fact that she not a conscripted member of ISF makes her something of an outsider among the crew, fitting in more with the androids on board. Things immediately start going wrong when they arrive at the planet. Facing mistrust and paranoia, Park has to figure out what’s going on before it’s too late.

The opening’s a bit slow as you’re introduced to a lot of characters, settings, and history. It’s also frustrating as you’ve only got the information that Park is privy to (with the exception of some emails at the start of some chapters), so it takes quite a while before you both begin to understand what’s going on. That slow opening pays off at the half way point when the tension ramps up and it becomes very hard to put the book down.

The book begins with a mystery but parts in the middle felt very much like a horror novel. The action is fast and explanations limited (though eventually you do learn enough to understand what’s really going on).

Park is a challenging protagonist as she has a limited range of emotions. It’s easy to understand why she’s ostracized by her peers, but seeing her actions from the inside helps the reader empathize with her. I did find it a little strange that a 13 member human crew could make a 3 floor ship feel crowded and full of ‘cliques’, but those early complaints faded as the action ramped up. I enjoyed seeing Park’s friendship with various androids as the book progressed.

It’s an interesting book. Definitely worth pushing past the opening to see where the book goes. The ending felt right, though it left unanswered questions.
Email ThisBlogThis!Share to TwitterShare to FacebookShare to Pinterest
Posted by Jessica Strider at 08:01