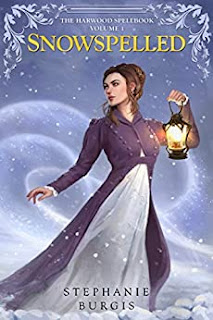 Cassandra’s first social event after losing her ability to work magic and breaking up with her fiance starts off poorly. A carriage of ladies has been stopped by trolls and forced to walk in the snow, getting lost. While helping look for them, Cassandra’s ex shows up just as she wakes another troll and makes an unfortunate promise. Now she has a week to find out who’s cast an impossible weather spell or be imprisoned by an angry elf lord.

This is a fun novella with romance and fantasy elements. The setting is an England where Queen Boudicca ran off the Romans and her descendants made a peace pact after warring with the elves. Politics is a woman’s game, and the pact demands rituals be performed perfectly.

Cassandra was the first female magic practitioner, but after a mysterious event, she can no longer use magic. She’s a headstrong character that you can’t help but sympathize with, who learns a few lessons about her own privilege even as her life hasn’t turned out as she planned.

The romance is fun and engaging.

Magic is sparingly used, but interesting when it comes up.

This is the start of a series but can be read as a standalone.
Email ThisBlogThis!Share to TwitterShare to FacebookShare to Pinterest
Posted by Jessica Strider at 10:19