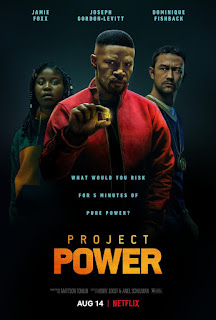 Cons: doesn’t delve into to the personal costs of taking the drug beyond the obvious

There’s a new drug in New Orleans called ‘power’ that grants the taker 5 minutes of an unknown animal based ‘super power’. A cop wants the drug to level the playing field. A vigilante wants to find the source of the drug. Both turn to a teenaged dealer just trying to make a better life for herself and her mom.

The characters were interesting and I found their stories compelling. There were a few scenes I thought were just for character building but turned out to contain plot elements, which was great. The script was tight and entertaining with a couple of good twists along the way.

Jaime Foxx’s humour in the 90s turned me off, but I’m finding he’s a fantastic action hero and does an amazing job as the vigilante, Art. Joseph Godon-Levitt’s cop was kind of unorthodox but fun. His scene with Robin’s mother was pretty funny despite the tension. I really liked Dominique Fishback as Robin. She hit the right mark of needing adult help while maintaining the teen core of ‘I can take care of myself’.

There are some excellent fight scenes. One started out kind of unique but they kept up the ‘shoot from behind glass’ too long making the end of the fight very hard to follow.

The powers are determined by what’s found in nature, which still leaves an impressive range. They were used enough to demonstrate what’s possible, but not enough to ruin the novelty. The special effects were very high quality and looked amazing.

My only complaint with the film is that it doesn’t really address the personal consequences of taking the drug. It points out that not everyone gets a super power, some simply blow up, but doesn’t really point out that even in cases where people do get super powers, the powers themselves can - apparently - seriously mess the taker up too. For example, the guy with fire power apparently gets seriously burned by them. Is it the power that burns him or the aftereffects (the fire around him once the 5 minutes are up)?

On the whole it was a great film and it’s surprising I hadn’t heard about this film before turning it on.
(If you watch the trailer, be aware that past the half way point they reveal several spoilers.)
Email ThisBlogThis!Share to TwitterShare to FacebookShare to Pinterest
Posted by Jessica Strider at 10:03