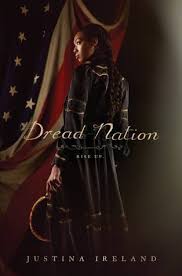 Jane McKeene is in her final year at Miss Preston’s School of Combat for Negro Girls. At 17 she’s trained to become an Attendant, to protect a white young lady from shamblers - the undead - and protect her modesty from amorous young men. But what she really wants is to return home to Rose Hill and her plantation owning Momma.

Though the war between the North and South was set aside to deal with the undead as they rose, racial tensions haven’t eased, and some people believe the shamblers are God’s punishment for trying to make all men equal. These men build communities behind walls. But can walls really keep the monsters of the world out?

When a friend of Jane’s asks for help finding his missing sister, Jane stumbles into trouble even her combat training hasn’t prepared her for.

I absolutely loved Jane and was astonished at how self-aware she was for a seventeen year old. She recognizes that she lies a lot and acknowledges her other faults, even as she often revels in rule breaking. She’s impulsive and often later regrets her actions but can’t stop herself from acting first and thinking later, a trait that actually saves her life on occasion. She’s also really smart, though realizes that there’s often safety in appearing to be less intelligent than she is.

Katherine was also great. I liked that her animosity with Jane was due to superficial things, so it didn’t feel manufactured when they started becoming friends.

As a Canadian, I don’t know much about the American Civil War or it’s immediate aftermath, so I don’t know to what extent things have been twisted here, though I did recognize the names of a few of the Generals referenced. There’s an author afterward talking about the Indian residential schools that come up in the book and how she used them as a template for her training schools.

I thought the author incorporated the zombies into the history quite well. Due to the period in which the book is set, some offensive language is used. The ’n’ word is not, but other slurs do appear. This made parts of the book uncomfortable to read, but it’s the discomfort of how horribly some people treated others.

This is a brilliant book and I highly recommend it.

Email ThisBlogThis!Share to TwitterShare to FacebookShare to Pinterest
Posted by Jessica Strider at 16:17