Book Review: The Invention of Hugo Cabret by Brian Selznick 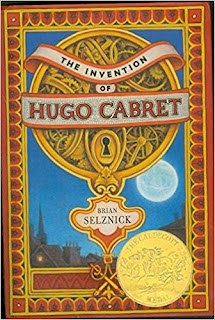 Cons: most of the conflict is due to Hugo keeping secrets

Hugo Cabret lives in the Timekeeper’s room inside a Parisian train station. When an elderly toy maker catches him stealing a toy mouse, the man takes a notebook Hugo received from his deceased father. The notebook contains images of an automaton Hugo’s trying to fix, images that cause a startling reaction from the old man.

The book follows Hugo as he tries to get the notebook back and interacts with the man and his goddaughter, Isabelle. There are old movies, magic, clocks, thefts, and lies. The best part of the book is that the movies and automata discussed are all real.

This is a fun - and fast - read. Some sections are told through full page illustrations rather than text, giving the book the feeling of a movie. The immediacy of the action and Hugo’s point of view narrative enhance that feeling.

There are some tense moments, especially towards the end of the book.

While I can understand Hugo’s fear of being taken from his current home and his fear of what would happen to him, it has to be said that most of the problems he encounters throughout the book are due to his inability to trust others, even after they’ve been proved trustworthy and his compulsive need to keep secrets. Things would have resolved much faster had he told Georges why the notebook was so important to him.

Though it’s a thick book (due to the images) it really is an easy read, perfect for readers of all ages.
Email ThisBlogThis!Share to TwitterShare to FacebookShare to Pinterest
Posted by Jessica Strider at 11:20