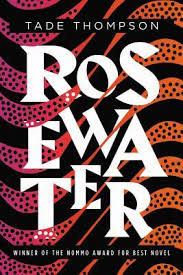 Cons: more details of bodily functions than I needed

Kaaro’s criminal past and his abilities as a sensitive have trapped him in the role of government agent. His assignment is to live in Rosewater, a city surrounding a mysterious alien biodome that once a year heals those that stand within a certain area, and learn what he can about it. When the sensitives around him start getting sick, he realizes that change is coming, and tries to finally uncover the mystery of the alien, his abilities, and what they mean for the future.

The book mostly takes place in Nigeria in 2066, with flashbacks of Kaaro’s life, particularly around 2055, when he was first recruited by S45 and Rosewater was founded. I don’t know much about Nigeria, so it was great reading about how it might look in the future, with several chapters taking place in Lagos and neighbouring areas. There were food and religious references and translated lines in some of the regional languages.

Kaaro’s an interesting character. He starts out apathetic to what’s going on around him and slowly comes alive as he falls in love during the course of the book. He’s an avowed coward and thief, so he’s not the easiest protagonist to like, but his life is very different and so carries the book well.

While you don’t learn too much about the aliens they are unique and make the mystery compelling. Some early information doesn’t make much sense (like using anti-fungal cream to reduce psychic abilities) but they are explained in time. As the story progressed I found it harder to put the book down.

I could have done without some of the mentions and descriptions of bodily functions. While the sexual ones at least gave character information (even if I didn’t feel I needed to know about every erection he had), on a few occasions bowel movements were also mentioned.

If you’re looking for unique science fiction, pick this up.
Email ThisBlogThis!Share to TwitterShare to FacebookShare to Pinterest
Posted by Jessica Strider at 10:12