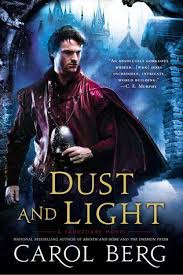 Cons: so much bad stuff happens to Lucian it can feel pretty intense in parts

Lucian de Remeni-Masson was punished for his youthful indiscretion by having his magical history ‘bent’ burned out of him, leaving him only his ‘bent’ for art. He was also given a Registry contract, painting portraits of other Purebloods. When his extended family is all killed, save one younger sister, he thinks it’s nothing more than a Harrower attack. But when he’s suddenly contracted out to a common coroner he slowly begins to realize that the attacks on his family aren’t finished. His magic of seeing truth through art reveals that noble children are being killed, and the coroner wants to catch the culprit. But that same art may have revealed secrets those in power would prefer stayed hidden.

It’s been a few years since I’ve last read a novel by Carol Berg and I’ve missed the depth of feeling she evokes in her characters. I’d also forgotten just how much she tortures her protagonists. Her books tend to be very intense reads and the first book in this Sanctuary duology is no exception. There’s no graphic depictions, but you definitely feel Lucian’s despair at numerous points in the book. While it’s set in the same world as Flesh and Spirit and Breath and Bone, you don’t have to have read those in order to enjoy this one.

There’s a lot going on in this book, from the mystery surrounding Lucian’s family’s murder, the dead children, mythological danae, and what really happens when Lucian invokes his magical bent. There’s also a civil war and famine going on.

Berg’s worldbuilding is as brilliant as always. Her worlds always feel realistic, with complex social systems (here there’s commoners, royalty, clerics, the Cicerons and Pureblood magicians). I love how different characters all have realistic - and often opposing - priorities, making it hard for Lucian to know who to trust. I loved his relationship with Bastian, with the two of them constantly rewriting their roles and how they interact, based on what’s been happening. They slowly learn to trust one another, but it’s always a tentative thing, due to their different backgrounds and expectations.

The ending is such that you’ll want the next volume at hand when you finish.
Email ThisBlogThis!Share to TwitterShare to FacebookShare to Pinterest
Posted by Jessica Strider at 09:53