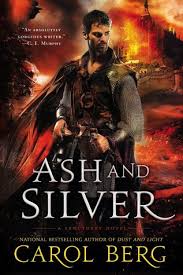 Cons: opening drags a bit, some questions of how the Order works in practice

Two years into his training to become a knight of the Order of the Equites Cinere, Greenshanks learns that his real name is Lucian de Remeni. His memory was wiped when his service began, and it quickly becomes clear that he left a lot of important things undone before he joined the Order. Now caught in numerous plots and unsure of who to trust, Lucian works to understand his past while saving the future of his world.

The two year gap and Lucian’s memory loss made it difficult for me to jump back into the story. It felt more like a new story rather than a continuation. Once hints of his past started to surface things began to pick up. The second half of the book was a whirlwind of action and I had trouble putting the book down as the plots within plots slowly unravelled.

There’s a lot of mystery and intrigue, more interesting because while the plots mostly overlap through Lucian, many of the players are unaware of each other. Seeing things purely from Lucian’s POV, it’s hard to know who he should trust and what actions he should take.

I loved all of the new characters, particularly the knights. Commander Inek and Fix were great.

I did have some questions about how the Order remained secret considering it’s populated by Purebloods, people under tight Registry regulation. Do the knights remove all trace of their past lives? That is, do they remove memories of them from their loved ones and removed their names from the registry so that they’re not considered runaways? Or are their deaths faked when they join? Lucian’s wasn’t so why aren’t people looking for all these missing Pureblood men?

There are quite a few major plot twists and my emotions were jerked around quite a bit the last few chapters. I liked that the ending ties some things up but leaves others open, with the world continuing on.
Email ThisBlogThis!Share to TwitterShare to FacebookShare to Pinterest
Posted by Jessica Strider at 10:59