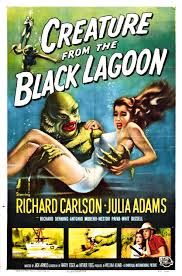 When a scientist makes an amazing discovery in the Amazon jungle, a team returns to continue the dig. But instead of more fossils, they find something alive and deadly.

I was impressed by the music and its role in creating much of the tension in the film, especially during the well shot underwater scenes. One refrain has what might be the genesis of the JAWS theme (the pulsing 2 beat alteration). The pacing was great, with some down time between ‘scares’.

The plot, while simplistic, does what’s required in a horror film. The acting’s pretty good, though I wish Kay had more to do - as a scientist - than swim and look pretty and scream occasionally when things go wrong. In researching her rather distracting wardrobe for the film I learned that Madonna’s pointy bra was actually a throw back to 40s and 50s ‘bullet bra’ fashion. Huh.

While it’s not scary in today’s terms, I can imagine that it caused people to jump or scream in theatres back when it opened. The creature looks great considering it’s a rubber suit. I’m impressed that they thought to have it swim in a different way from humans to make it feel more alien. I also liked its open mouthed breathing on shore (though it wouldn’t surprise me to learn this had something to do with the make-up rather than as a creature ‘effect’).

The film holds up surprisingly well.

Email ThisBlogThis!Share to TwitterShare to FacebookShare to Pinterest
Posted by Jessica Strider at 09:50