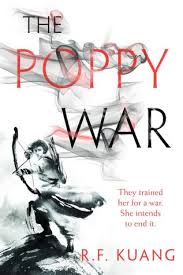 Fang Runin knows the Keju exam is her only way out of a miserable village life working as shopkeep for her adoptive opium smuggling parents. And only Sinegard charges no tuition. But getting into the Empire’s preeminent military academy is just the first hurdle she must overcome, for war is coming to the Empire. And she’s going to use everything she’s learned to win it, even the power of the gods themselves.

This book is absolutely brilliant. The writing is lyric and feels so effortless you know the author worked HARD on it.

The book is predominantly character driven, which I normally don’t like, but Rin is such a fascinating character that I loved it. With so much intricate history to learn with Rin as she goes through her classes, I never felt bored. The supporting cast was equally interesting from the eidetic memoried Kitay, the other two girls in her year, and her rival, Nezha.

When the war starts there’s little talk of heroism, it’s a realistic portrayal of fear and butchery. There are some brutal descriptions of wartime atrocities committed by the enemy. Seriously horrific stuff. Like, nightmare fodder if you think about it too much.

The worldbuilding was solid. There’s multiple branches of history, various races with their own customs, the people on the mainland have different dialects. The politics even in the Nikara Empire were messy and complex, not to mention the relationship they had with their neighbouring countries. There are some WWII reference with regards to the naming of characters and some of the horrors that happen at the end.

While I’m not a fan of swearing in fantasy (or books in general) I’d say it was handled well here. It’s not excessive, and when it shows up it’s appropriate to the situation.

There are several philosophical questions the book asks, especially towards the end. I love books that make me think.

This book was brilliant. Pick it up if you haven’t already.
Email ThisBlogThis!Share to TwitterShare to FacebookShare to Pinterest
Posted by Jessica Strider at 10:34