Book Review: The Empire of Ashes by Anthony Ryan

This review is for book 3 of the Draconis Memoria series. Click the links for my reviews of The Waking Fire and The Legion of Fire. 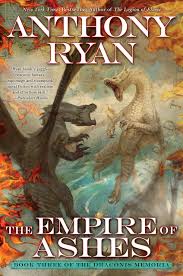 Clay is returning from the South with a new mission to help defeat the white dragon: find a sunken treasure in the Krystaline Lake, deep in dragon country. Lizanne has the tinkerer, but unlocking the Mad Artisan’s secrets isn’t easy, nor is finding safe haven for the growing number of refugees she encounters. Sirus, General of the White dragon’s army of Spoiled, marches his troops across the world, pillaging and ‘recruiting’ as they go under the watchful eye of the insane Catheline Dewsmine. But he’s got a plan to betray his masters once the time is right…

If you like your books with lots of action and military campaigns (on land, sea, and sky) then this is the series for you. The action quickly ramps up and the majority of this book is one battle after another. It’s impressive how the characters persevere despite the losses each side takes. It’s also impressive how the author keeps each fight scene fresh, bringing in new tactics and weapons as well as varying the locations and situations.

You finally discover who the Mad Artisan is, and see some newly invented war machines. You also learn a little bit more about Kris, though I’d have enjoyed learning more about her people and how they tinkered with the dragons.

Normally I like short denouements to books, but while the epilogue does touch on what everyone’s doing after the book ends, I would have liked more details of how they pick up the pieces. The ending is highly satisfying, but it’s hard leaving characters I’ve come to love.

This is an excellent series with a highly unique magic system and some excellent worldbuilding and characters. I highly recommend it.

Email ThisBlogThis!Share to TwitterShare to FacebookShare to Pinterest
Posted by Jessica Strider at 16:20