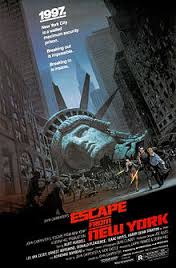 Set in 1997, super high crime rates required turning Manhattan Island into a walled prison. When Air Force One crashes inside its boundary, ex-soldier and recent convict Snake Plissken is given a chance at a pardon. To get it, he has to go in and bring the president out alive.

This is one of those influential ‘80s films that I somehow missed growing up.

I suspect the acclaim for the film is due to nostalgia, because it’s quite a boring film to watch. The light techno music was an odd touch for the opening credits, with the theme sounding much like Halloween’s at times (which isn’t surprising when you note that both were composed by John Carpenter). Given the theme of the film I was expecting something more heavy metal.

The acting was decent, though the story left a lot to be desired. There were so many world-building questions left unanswered. Questions like: Why does everyone know who Plissken is? Why did he rob a bank? What’s on the tape? Does the ending mean there’s going to be another war (or renewed war? I believe the summit was to end the current war with China and Russia).

The sets were amazing. The building where Plissken gives the woman a smoke was creepy, and contained the only 2 scares in the whole movie. I loved the old library turned Brain’s base, and the Duke’s subway hideout.

The action was ok. Having only recently seen They Live for the first time too, I’m guessing Carpenter was enamoured of the WWF (both films have a protracted fight scene, I also remember the WWF being huge when I was a kid, and knowing all the major fighters).

Snake Plissken was a surprise. I was expecting someone like other 80s heroes (or anti-heroes). Brash, noisy, in your face. So his soft voice and complete lack of interest in the mission was interesting. I wish the film explained more of his past, as he sounded like an interesting person.

I have to admit, this isn’t a movie I’d watch again.
Email ThisBlogThis!Share to TwitterShare to FacebookShare to Pinterest
Posted by Jessica Strider at 11:18