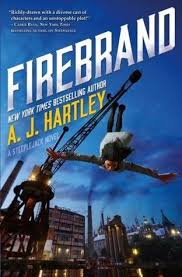 Grappoli is invading more native territory, sending refugees fleeing to the city of their enemy, Bar-Selehm. But Bar-Selehm’s politicians aren’t sympathetic to the refugees’ plight, and some believe the time to unite with their white brothers of Grappoli, at the expense of the black and brown lower classes of their own city, has arrived. When important military papers are stolen, a clue sends Anglet Sutonga to an exclusive club, where she investigates the connections of its members.

This is the second book set in this faux 19th Century South Africa. While you can read this without having read Steeplejack, characters are reintroduced without preamble, so you may find yourself confused by some of the relationships. The plot is self-contained and while the politics carry on from the previous book, it’s easy to figure out what’s happening in that respect. Some of the world-building assumes you’ve read Steeplejack, so there’s little explanation of the Drowning and the racial divisions of the city, though those come up a lot in the story.

The world-building on the whole is excellent. Again, there’s very little of the book happening outside the city, but the city itself affords lots of conflict. I’m impressed by how detailed and realistic the interconnectedness of everything is in the book.

I really like Anglet. She’s young, passionate, and tries to do the right thing, even when knowing what the right thing to do is difficult. And with the racial and political tensions running through this book, she’s often left unsure of why she feels like she does and whether her work for Willinghouse is achieving any good. I especially liked her confusion over how to best help the refugees, and why she felt a connection to their sorrows despite their differing circumstances.

I appreciated the introduction of a deaf character and the chance to see more of Bar-Selehm’s society (high and otherwise). I liked the fact that characters had differing opinions on the political situation of the city.

Unfortunately I read the book in a disjointed manner, which made it hard for me to recollect who some of the players were. There are certain scenes that require a careful reading, as the cast is fairly large and some seemingly minor details become important later on.

The plot went in several disjointed directions as Anglet slowly figured out what was going on, pulling together for the climax.

I really enjoyed this book, and its discussion of racism, refugees, and colonialism is topical.

Email ThisBlogThis!Share to TwitterShare to FacebookShare to Pinterest
Posted by Jessica Strider at 17:11