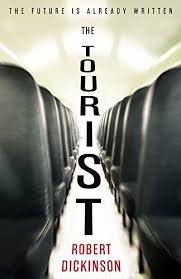 The future cannot be changed by time travelling. Spens is a Tri-Millennium Travel rep, escorting tourists from the 24th Century around in the 21st. The resort’s records from the future do not show that anything happened, but a tourist’s disappearance greatly effects their own time.

Unfortunately I found the book disappointing. I liked the characters and thought the racism (? not sure that’s the right word) directed against the people of the future by the people of the present is unfortunately realistic and well portrayed. There was a real complexity in the world-building around language and expressions, which I enjoyed. I also liked that there were protocols governing time travel that determined what you were allowed to know/tell others about the future/past depending on where they are in the timeline. This is important as some characters meet each other outside of sequential time. I also liked the idea that for some people knowing their future could be burdensome, in that it created an obligation to fulfill the future, while for others it was comforting.

I found the pacing uneven in that a lot is happening but you don’t seem to learn much of importance. Each new revelation just confused me more, until I wasn’t sure what was actually important (or relevant) for the plot. Half way through the book I considered stopping because the mystery didn’t seem to be going anywhere.

As a result, I found the ending wholly unsatisfying. I was left with a lot of questions and some confusion. Either someone was lied to about their future, or the future was, in fact, changed, something that we’re told early on is impossible. It also annoyed me that a major plot arch depended on a paradox, with no discussion of how paradoxes work within this world.

I was really pissed that we never learn what’s in the box. We’re left assuming they were instructions, but when Adorna (for the sake of ease I’ll use that name) goes back into the past the second time, she doesn’t give him any new instructions. Which makes me wonder why she was sent back the first time at all. Was Delrosso supposed to start bobby trapping the metal caches? The fact that the box kept turning up left me expecting it would eventually be opened and its contents revealed to be important (maybe they’d learn the sabotage plans and stop the NEE or something - but then I’m reminded that the future can’t be changed…).

But that ignores a larger question: Adorna was a complete peon the first time she went back, apparently unable to form independent thoughts or act without instructions. How did she morph into the woman who goes back as En Varney? As En, she starts a highly sophisticated effort in sabotage. We’re meant to believe she’s suddenly self-motivated and comfortable dealing with people enough to hold down her job as well as make the underworld connections she does without new training?

The paradox of her doing things at the instructions of her older self - who’s present in the same time despite some vague comments that that’s bad - was annoying. I’d have liked some discussion of how paradoxes work, and, for that matter, why being in the same place twice is bad (because nothing happens to her, despite being in fairly close proximity to her other self).

A smaller question I have is what exactly about his extraction mission convinces Riemann to waste 15 years of his life to meet Adorna again? Was it watching Spens die? Was it really just to talk to Adorna again? Because if it was, he didn’t say much of worth. Yeah, he told her some stuff about her past and future, but without any proof I’m not sure why he thought she’d believe him and change what she was doing. He doesn’t try to appeal to her humanity in any way - explain the deaths her sabotage will cause in any graphic sense. It just seemed kind of useless.

And I’m left assuming Spens’ future facts are all lies, since he’s obviously meant to die at the end, out of time and place of where he was told he would die.
Email ThisBlogThis!Share to TwitterShare to FacebookShare to Pinterest
Posted by Jessica Strider at 08:14