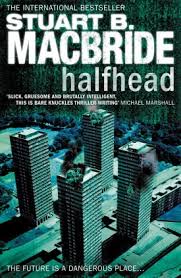 In a future where convicted criminals are lobotomized and have half their jaw removed a convicted serial killer halfhead has regained a sense of herself, over the mutilated body of the man she’s just killed. Assistant Network Director William Hunter has nightmares about the last time he visited Sherman House, the multi-storied residence where he fought during the VR riots. He’s not happy returning to Sherman House now, to investigate the second gruesome murder in the building that week. Something’s not right with Sherman House, and Hunter’s digging threatens to expose something that powerful people want kept quiet. Something involving the work done by a certain halfhead killer.

If you’re squeamish, this is not the book for you. In many ways it reminded me of the original Robocop film, only without the black humour. There’s a lot of blood, guts, and some truly disturbing descriptions of violence. Though, I will say that you don’t get much graphic violence (ie, most of it is descriptions after the events have happened, rather than first person views of the violence itself). The characters all take quite a number of literal beatings. There’s also mention of torture, but no descriptions.

The mystery is interesting. The halfhead’s story is terrifying. William’s a great character, and I enjoyed seeing him break the rules to get to the bottom of what was going on. I really liked Jo as well. She’s spunky with a crazy fashion sense. Emily kept making me think of Emily Blunt, partly because of her name and partly because of her military kickass character in Edge of Tomorrow. Brian’s accent caused me some issues, but I liked seeing him helping William out as a friend.

While I enjoyed aspects of the book, I don’t think I’d reread it, simply because I had to work hard not to let any of the visual imagery give me nightmares. A few scenes were quite disturbing and I wouldn’t want to revisit them. The ending alone was kind of terrifying. While this isn’t technically a military SF book, there’s enough military style action to please lovers of that sub-genre. Similarly if you like mysteries or serial killers, this might be for you.
Email ThisBlogThis!Share to TwitterShare to FacebookShare to Pinterest
Posted by Jessica Strider at 10:31