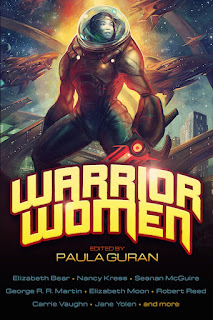 Two dozen stories of women warriors form this epic anthology of stories about those forced to fight, those who chose to fight regardless of odds, those who ran from their destiny as warriors, and those who will end war at any cost.

In Caitlín R. Kiernan’s “The Sea Troll’s Daughter,” the titular daughter of a fearsome beast reluctantly confronts the woman who slew her father. In Carrie Vaughn’s nonspeculative “The Girls from Avenger,” a WWII pilot tries to determine the cause of her friend’s mysterious crash. An immortal wandering warrior meets an immortal prisoner in George R.R. Martin’s hopeful but bleak “The Lonely Songs of Laren Dorr.” Spaceship captain Tory Sabin must battle bureaucracy and physics to locate a missing friend in “The Application of Hope” by Kristine Kathryn Rusch.

The warriors include girls as well as grown women: young Thien Bao is offered the chance to end a cataclysmic war at an unimaginable cost in Aliette de Bodard’s “The Days of the War, as Red as Blood, as Dark as Bile,” and a girl who discovers her father is a “monster” grows into a woman who tries to save others from his fate in Ken Liu’s “In the Loop.”

Each story contains strength and compassion, even when the personal cost is high. The depictions of battle and trauma are rarely graphic, but they’re as hard-hitting as the subject demands. This is a truly impressive accomplishment for Guran and her contributors.
Table of contents
Email ThisBlogThis!Share to TwitterShare to FacebookShare to Pinterest
Posted by Jessica Strider at 09:03