My thanks, as always, to the publishers who have sent me books this month. 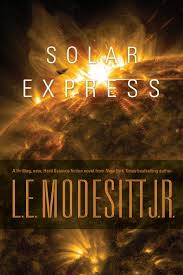 You can't militarize space. This one rule has led to decades of peaceful development of space programs worldwide. However, increasing resource scarcity and a changing climate on Earth's surface is causing some interested parties to militarize, namely India, the North American Union, and the Sinese Federation.

The discovery of a strange artifact by Dr. Alayna Wong precipitates a crisis. What appears to be a hitherto undiscovered comet is soon revealed to be an alien structure on a cometary trajectory toward the sun. Now there is a race between countries to see who can study and control the artifact dubbed the "Solar Express" before it perhaps destroys itself.

Leading the way for the North American Union is Alayna's friend, Captain Christopher Tavoian, one of the first shuttle pilots to be trained for combat in space. But, as the alien craft gets closer to its destination, it begins to alter the surface of the sun in strange new ways, ways that could lead Alayna to revolutionary discoveries-provided Chris can prevent war from breaking out as he navigates among the escalating tensions between nations.


Out of Tune by Jonathan Maberry, Ed. (audiobook) - I'm halfway through this anthology based around old ballads.  The stories so far have all been of high quality. 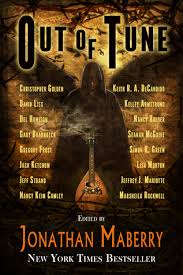 Out of Tune is calling. A song half-heard. The murmur of a voice singing in the dark. There it is again...a few words set to an old melody filled with mystery, heartbreak and horror. Out of Tune gathers a collection of original dark fantasy tales inspired by folk ballads. Here you'll find stories of strange creatures and strangers humans, treachery and love, murder and monsters. Out of Tune brings together some of today's most talented writers and sets them loose in that swirling darkness at the edge of town.


Shadows of Self by Brandon Sanderson - I really enjoyed The Allow of Law and am looking forward to jumping into this book.  The third book in the series, The Bands of Mourning, is out January 26th. 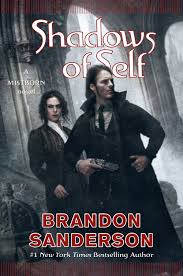 With The Alloy of Law, Brandon Sanderson surprised readers with a New York Times bestselling spinoff of his Mistborn books, set after the action of the trilogy, in a period corresponding to late 19th-century America.

The trilogy's heroes are now figures of myth and legend, even objects of religious veneration. They are succeeded by wonderful new characters, chief among them Waxillium Ladrian, known as Wax, hereditary Lord of House Ladrian but also, until recently, a lawman in the ungoverned frontier region known as the Roughs. There he worked with his eccentric but effective buddy, Wayne. They are "twinborn," meaning they are able to use both Allomantic and Feruchemical magic.

Shadows of Self shows Mistborn's society evolving as technology and magic mix, the economy grows, democracy contends with corruption, and religion becomes a growing cultural force, with four faiths competing for converts.

This bustling, optimistic, but still shaky society now faces its first instance of terrorism, crimes intended to stir up labor strife and religious conflict. Wax and Wayne, assisted by the lovely, brilliant Marasi, must unravel the conspiracy before civil strife stops Scadrial's progress in its tracks.

Shadows of Self will give fans of The Alloy of Law everything they've been hoping for and, this being a Brandon Sanderson book, more, much more.


Air and Darkness by David Drake - I can't believe I haven't heard of this series before now.  It's the fourth and final book in a fantasy retelling of Roman events and sounds awesome.  I've heard you can read these as stand alones, but I'll want to start with the first book, The Legions of Fire. 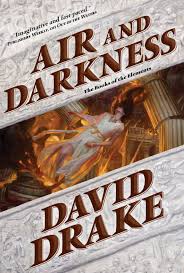 Air and Darkness, an intriguing and fantastic adventure, is both an independent novel and the gripping conclusion of the Books of the Elements, a four-volume set of fantasies set in Carce, an analog of ancient Rome by David Drake. Here the stakes are raised from the previous novels in an ultimate conflict between the forces of logic and reason and the forces of magic and the supernatural. During the extraordinary time in which this story is set, the supernatural is dominant. The story is an immensely complex journey of adventure through real and magical places.

Corylus, a soldier, emerges as one of the most compelling heroic figures in contemporary fantasy. Battling magicians, spirits, gods, and forces from supernatural realities, Corylus and his companions from the family of the nobleman Saxa-especially Saxa's impressive wife Hedia, and his friend (and Saxa's son) Varus-must face constant deadly and soul-destroying dangers, climaxing in a final battle not between good and evil but in defense of logic and reality.


Mystic by Jason Denzel - I reviewed this book yesterday.  It has some great world-building and a protagonist who realizes having friendly support is important. 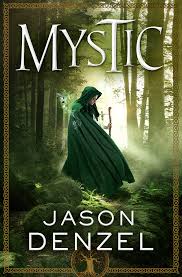 I called to the Myst, and it sent us you.

For hundreds of years, high-born nobles have competed for the chance to learn of the Myst. Powerful, revered, and often reclusive, Mystics have the unique ability to summon and manipulate the Myst: the underlying energy that lives at the heart of the universe. Once in a very great while, they take an apprentice, always from the most privileged sects of society. Such has always been the tradition-until a new High Mystic takes her seat and chooses Pomella AnDone, a restless, low-born teenager, as a candidate.

Commoners have never been welcomed among the select few given the opportunity to rise beyond even the highest nobility. So when Pomella chooses to accept the summons and journey to Kelt Apar, she knows that she will have more to contend with than the competition for the apprenticeship.

Breaking both law and tradition, Pomella undergoes three trials against the other candidates to prove her worthiness. As the trials unfold, Pomella navigates a deadly world of intolerance and betrayal, unaware that ruthless conspirators intend to make her suffer for having the audacity to seek to unravel the secrets of the Myst.


Wheel of Time Companion by Robert Jordan, Harriet McDougal, Alan Romanczuk and Maria Simons - I read the first 5 or 6 books years ago, and should really read the rest. This looks like an excellent resource if you can't remember who side characters are or want more information about people, places and things. 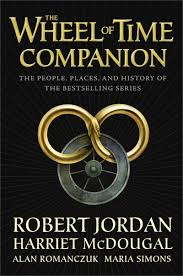 Since its debut in 1990, The Wheel of Time by Robert Jordan has captivated millions of readers around the globe with its scope, originality, and compelling characters. Over the course of fifteen books and millions of words, the world that Jordan created grew in depth and complexity. However, only a fraction of what Jordan imagined ended up on the page, the rest going into his personal files.

Now The Wheel of Time Companion sheds light on some of the most intriguing aspects of the world, including biographies and motivations of many characters that never made it into the books, but helped bring Jordan's world to life.

Included in the volume in an A-to-Z format are:
An entry for each named character
An inclusive dictionary of the Old Tongue
New maps of the Last Battle
New portraits of many characters
Histories and customs of the nations of the world
The strength level of many channelers
Descriptions of the flora and fauna unique to the world
And much more!