The first of the 4 novels published in the American Science Fiction two volume collection, The Space Merchants was originally published in 1953.  This is the original version (rather than the recent updated edition) of the book. 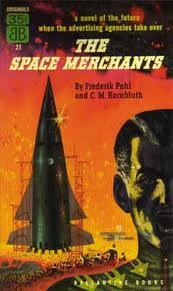 Cons: protagonist is unlikable (as are most of the supporting characters), protagonist can't think past himself

Mitchell Courtenay is assigned as head of Fowler Schocken's new Venus Section: making the planet look appealing for colonization and subsequent subversion by their company.  But this is a tough sell, not the least because of Venus's harsh atmosphere.  To help, he gets on retainer the only man who's ever been there, Jack O'Shea, little person pilot and new to fame and fortune.  The future overcrowded corporate run world has one main enemy - Consies (Conservationalists), whom Mitchell must deal with.  Finally, he must convince his not quite wife to take him back.

This book details a very scary future, and given that it was written in 1953, a surprisingly relavent one.  Corporations have nigh absolute power, and what little remains to governments can be easily bought.  Advertisers like Fowler Schocken cash in on the art of persuasion, with a touch of a mildly addictive substance added to their products that force consumers to keep buying them.

The novel is told mostly from the priviledged POV of Mitchell, though we eventually learn how others live and are treated by the corporations that come to own them (in a form of indentured slavery).

The plot has several fantastic ups and downs to keep readers on their toes.

I wasn't a fan of Mitchell.  He's fairly out of touch with the rest of the world (and how 'consumers' live) to be sympathetic.  Even at the end, when he's started to understand the larger picture, he's not particularly likable.  Having said that, I did want to see him succeed at the end, his enemies being even more dispicable (if characters wore hats he'd be in gray while most of the others would be wearing black).

The supporting characters aren't that sympathetic either.  Jack starts out as a great guy but quickly descends into - and is destroyed by - debauchery.  Mitchell's not quite wife, a surgeon, has her own negative aspects that are revealed later in the book.

St Martin's Press recently published a revised 21st century edition of this book.  Having read the original, it doesn't seem necessary to have updated it.  The story still has relevance in its original form and packs quite a punch with regards to where humanity is potentially heading.
Email ThisBlogThis!Share to TwitterShare to FacebookShare to Pinterest
Posted by Jessica Strider at 14:18